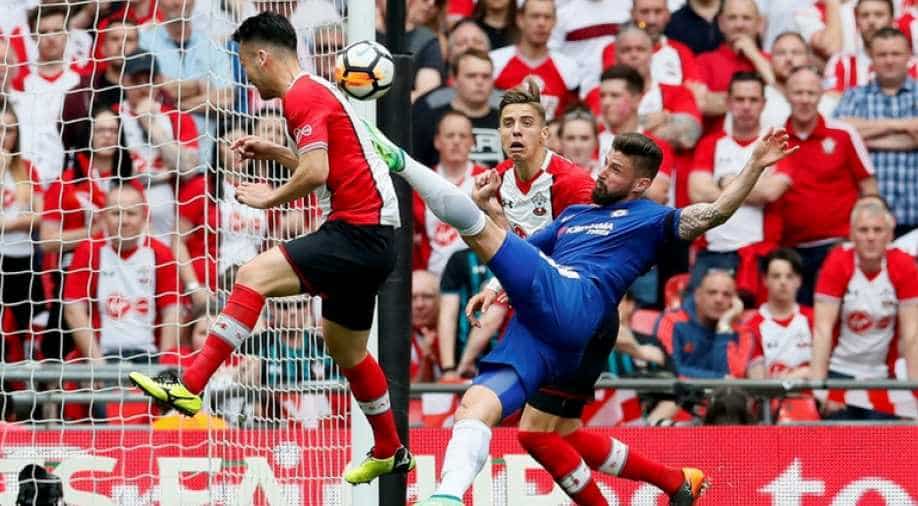 A flash of attacking brilliance from Olivier Giroud and an emphatic header from substitute Alvaro Morata earned&nbspChelsea&nbspa 2-0 win over struggling Southampton at Wembley on Sunday and an FA Cup final date with Manchester United next month.

Giroud muscled and dribbled past three defenders and flailing keeper Alex McCarthy seconds into the second half to poke the ball home from a pass by the ever-busy Eden Hazard.

"I love to play here (Wembley) and I have been unbeaten here so hopefully for the final we are going to keep it up," Giroud, whose Arsenal side beat&nbspChelsea&nbspin the final last year, told BT sport.

Morata, who came on for Giroud, made it two in the 82nd minute, nodding Cesar Azpilicueta's cross into the net.

Relegation-threatened Southampton were outplayed for most of the match but defended manfully during a dour first half, during which&nbspChelsea&nbspforward Willian hit the crossbar.

The Saints were forced to move out of their half after Giroud's goal and came close to equalising in the 72nd minute when&nbspChelsea&nbspkeeper Willy Caballero's save kept out Nathan Redmond's rasping shot.

They also had a possible goal not given when Charlie Austin was judged to have fouled the keeper. Austin then hit the post in the dying minutes of the game.

Chelsea&nbspwill meet Jose Mourinho's United at Wembley on May 19 after the Manchester side beat Tottenham Hotspur 2-1 in the first semi-final on Saturday.

The clash will have added spice because of the tension between former&nbspChelsea&nbspboss Mourinho and current coach Antonio Conte.

Hazard, who has played under both managers, said: "We gave everything, we played very good football especially in the second half and controlled the game.

"Now we go to the final and for the championship (Premier League) again and then we can think about the final against Manchester United."

Chelsea&nbspare fifth in the league but Hazard said they had not given up hope of making the top four and getting a Champions League spot as well as winning the FA Cup.