Explained: What is the 'halo device' that saved Lewis Hamilton's neck at the Italian GP

Hamilton thanked the halo device as he said, "I feel very, very fortunate today thank God for the halo. That did ultimately save me, you know, and saved my neck." But what exactly is the halo device? Find out here:

Mercedes racer Lewis Hamilton escaped a tragedy, a serious injury that is quite disturbing to even imagine after a terrifying crash with Red Bull's Max Verstappen at the Italian Grand Prix on Sunday (September 12).

During the race, when Hamilton exited the pit lane on lap 26 of 53, Verstappen approached him at 225mph and tried to go ahead of him. However, he ran off the track after the cars ran wheel-to-wheel and made contact at the first chicane, the Red Bull lifting off the kerb and into the air with both ending up in the gravel.

Verstappen's car flew over Hamilton's head as he was sent out of control, with the rear-right wheel crushing the top of Hamilton's Mercedes, who was saved by inches thanks to the halo protection device, that absorbed the crushing impact of Verstappen's 750kg machine.

Verstappen was penalised as he will serve a three-place grid penalty at the Russian Grand Prix in a fortnight's time for his role in the frightening crash.

Hamilton thanked the halo device as he said, "I feel very, very fortunate today thank God for the halo. That did ultimately save me, you know, and saved my neck."

The title rivals also collided at Hamilton's own British Grand Prix when Verstappen ended up in hospital for checks and Hamilton took the win.

Max Verstappen has to sometimes use his head man.
He wasn't gonna make that corner ahead of Lewis Hamilton.
I'll be surprised if there are people out here who will defend this.
Costly and stupid mistake.#ItalianGP #F1 pic.twitter.com/tEkfNw8l7k 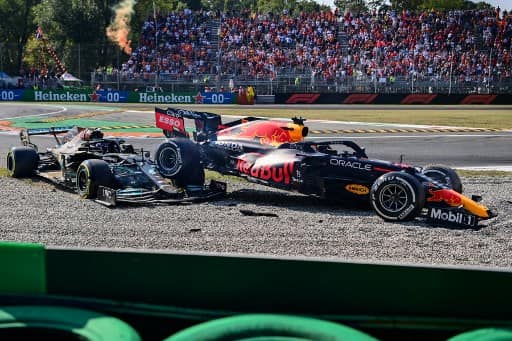 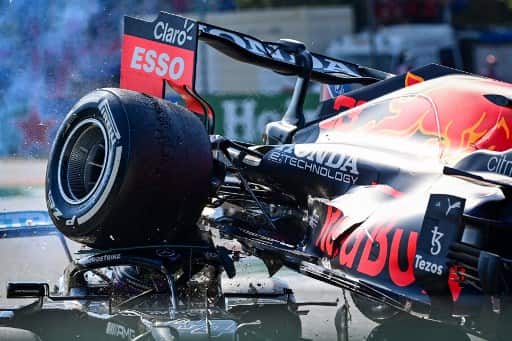 But what exactly is a halo device?

The halo protection device is a curved bar made of titanium and weighed around 7kgs, which is placed around the cockpit that surrounds the driver's head to protect her/him from any serious life-threatening injury. The device is connected by three points to the vehicle frame.

It was introduced in 2018 and was made mandatory on every vehicle in Formula 1, Formula 2, Formula 3, Formula Regional, Formula E and also Formula 4 as a new safety measure.

It is important to note here that the system is not developed by the teams, it is manufactured by three approved external manufacturers chosen by the FIA.

Initially, the device was criticised as it was claimed that the halo device will take away the essence of racing cars and will obstruct the driver's vision. Legendary racer like Niki Lauda was also not in favour of the device and even Hamilton was sceptical as he had called it "worst-looking modification" in the sport's history. However, Hamilton later accepted it. 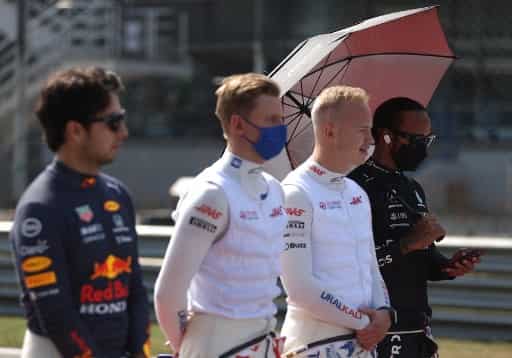 (Image: Lewis Hamilton takes part in the drivers ceremony on the grid before the Italian Formula One Grand Prix. Source: AFP)

Hamilton also said, "I don't think I've ever been hit on the head by a car before, and it's quite a shock for me."

"I'm so, so grateful that I'm still here. I feel incredibly blessed. I feel like someone was watching over me today, he added.

"We are taking risks and it's only when you experience something like that that you get the real shock of how you look at life and how fragile we all are." 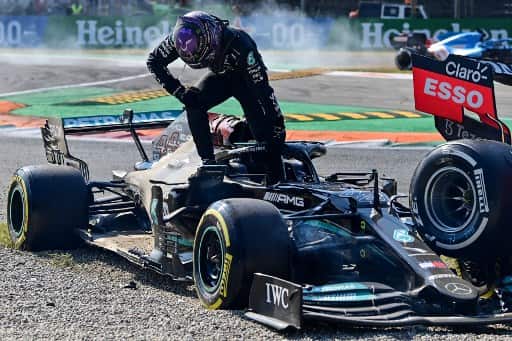 (Image: Lewis Hamilton gets out of his car. Source: AFP)

"I made sure I left a car's width on the outside for him, I went into turn one and I was ahead and going into turn two and then all of a sudden he was on top of me," said Hamilton.

Hamilton said that he had been surprised to see the title rival Verstappen get out of his car and "just walk by".

It's days like today, I am reminded of how lucky I am. It takes a millisecond to go from racing to a very scary situation. Today someone must have been looking down, watching over me! #TeamLH: I'm so thankful for each and everyone of you, you are truly the best. Still we rise! pic.twitter.com/H2sGtXPKrr

Lewis and Max on *that* collision 🗣🗣 #ItalianGP 🇮🇹 #F1 pic.twitter.com/Pc6Gh0H5BH

"He just didn't want to give way today and he knew when he was going into two what was going to happen... but he still did it," he told Sky Sports television. 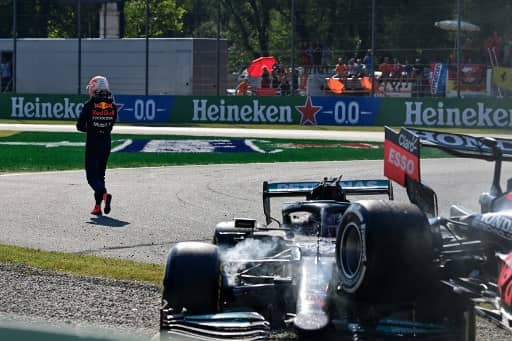 (Image: Max Verstappen walks out of the tracks after a collision. Source: AFP)

Mercedes team principal Toto Wolff commented: "The championship was good fun up until now but we saw the halo save Lewis' life today. We don't want to see someone seriously hurt."

On Verstappen's penalty, Hamilton added: "I am proud of the stewards.

"It sets a precedent and it is important for us moving forwards, for the safety of the drivers, that there are rules in place."

"If he would have left me just a car width we would have raced out of turn two anyway and I think he would have probably still been in front. But he just kept on pushing me wider and at one point there was nowhere to go."

After the incident, Verstappen took to his official Twitter as he wrote, "Today was very unfortunate. The incident could have been avoided if I had been left enough space to make the corner. You need 2 people to make that work and I feel I was squeezed out of it. When racing each other, these things can happen, unfortunately"

Today was very unfortunate. The incident could have been avoided if I had been left enough space to make the corner. You need 2 people to make that work and I feel I was squeezed out of it. When racing each other, these things can happen, unfortunately #ItalianGP 🇮🇹 pic.twitter.com/9xOmnqAtd8

Rival Red Bull boss Christian Horner, who described the crash as a 50-50 accident, said: "It was a very awkward accident and you could see Max's car right up the Mercedes.

Above everything, today we are so grateful for the advances in safety of our sport pic.twitter.com/oBgq5DxM91

What happened in the race?

As far as the race is concerned, Daniel Ricciardo won it and he was followed by his McLaren teammate Lando Norris in the British team's first win since the 2012 Brazilian GP, while Valtteri Bottas will take third despite starting in last place due to a five-second time penalty for Sergio Perez.

Pele not responding to chemotherapy, moved to end-of-life care: Reports