EXCLUSIVE: We were questioned and laughed at in past, this is our answer, says Sreejesh after India win Olympic Hockey bronze - Watch 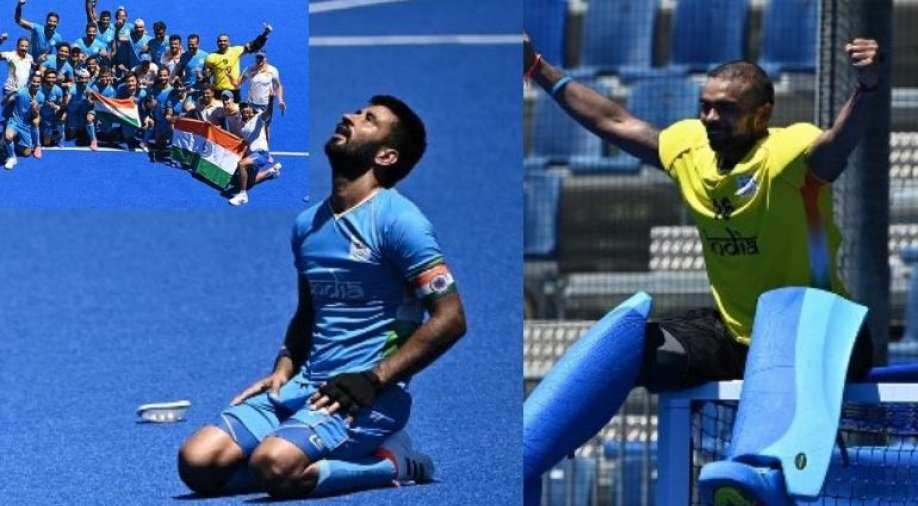 Indian men's hockey team captain Manpreet Singh and goalkeeper PR Sreejesh, along with the coach Graham Reid, spoke to WION after the team beat Germany to win the bronze medal at the Tokyo Olympics.

After India's hockey team won the bronze medal at the Tokyo Olympics beating Germany 5-4 in a nail-biting match, WION spoke to the captain Manpreet Singh and goalkeeper PR Sreejesh, along with the team's coach Graham Reid.

The Indian hockey coach said he had told the team to dare to dream, adding, "you have to be prepared to lose in order to win."

India's "wall" Sreejesh, who belongs to Kerala, said hockey can be developed in his state while asserting that he was "seriously proud" of his achievements.

"I am speechless, it was a great team effort," the star Indian goalkeeper said.

#EXCLUSIVE | "The team didn't take much time to bounceback. They were focussed. This is the answer to everyone who questioned us in 2012", says Indian Hockey Team Goalkeeper @16Sreejesh to @DiggySinghDeo @reidgj @manpreetpawar07 #Tokyo2020 #IndianHockeyTeam #Olympics pic.twitter.com/PEFUdJdTwh

Describing his emotions as India were declared winners against Germany in the bronze medal match, Indian captain Manpreet, 29, said the team was overjoyed calling it an "outstanding" performance.

The Indian captain said the players and the coach had tears of joy after the victory, India's first hockey Olympics medal in 41 years.

"He was just trying to be strong, saying I am not crying but actually he was crying," the Indian captain said jokingly referring to the coach.

"It was very testy on the field today which probably led to the emotions," the Australian admitted while adding that the "Olympics is special".

"It gets in your blood and in your heart and when you mix those two together then you get what you saw today."

"The last 15 months haven't been easy for the team including the whole world which also plays a fairly big role," the Indian team's coach said.

"We haven't seen our families for a very long time and missed little things like seeing my daughter, including missing birthdays and weddings which has been sacrificed for the greater good," the coach said.

"It makes it easier when things like this happen," the coach said haling India's victory.

Goalkeeper Sreejesh reflected on India's missed opportunities earlier, but said this time, the team had the confidence to win a medal.

Sreejesh said even though India didn't play well against Australia, the quality of the team stood out.

"We bounced back, played really well although we lost in the semi-final but the team spirit came through in the end," the Olympic bronze medallist said.

"The team did not take too much time to bounce back, they focused on their task. In today's match as well, we went down but due to our bonding, confidence and trust between each other, it helped us to get back," he said.

"We just snatched the match from the Germans," the Indian goalkeeper said proudly.

"This is the answer to everyone's questions, those who asked us questions earlier, this is it," he said. "Just wait, do the things and results will follow," Sreejesh said while taking a swipe at the detractors.

"We didn't get a medal in a long time so we created history. I think it will be good for the upcoming players who can now say they too want to win a medal just like this team and they can win too and create history again," India's captain said.

The Indian captain said it is a big win for the game and the Indian fans.

The match was a cliffhanger in the end as Germany was given a penalty corner with just seconds to go for the match to end, however, the Indian coach informed that there were about 29 seconds to go since the officials hadn't switched the clock back on after the timeout and so the clock stayed at 29.6 seconds for a period of time

"It was certainly more than 6.5 seconds, I was a little bit distracted trying to get the bench to switch the clock back on and to go back and check how much time was added on but we have a great penalty corner defence unit."

"I knew they would all be fighting for their lives to keep the ball out of the net and sure enough they did it," the coach said with relief.

The Indian captain excitedly informed that India's goalkeeper will be in charge of the celebrations tonight and will organise everything.

"Coach will do the snake dance today," the Indian goalkeeper said.