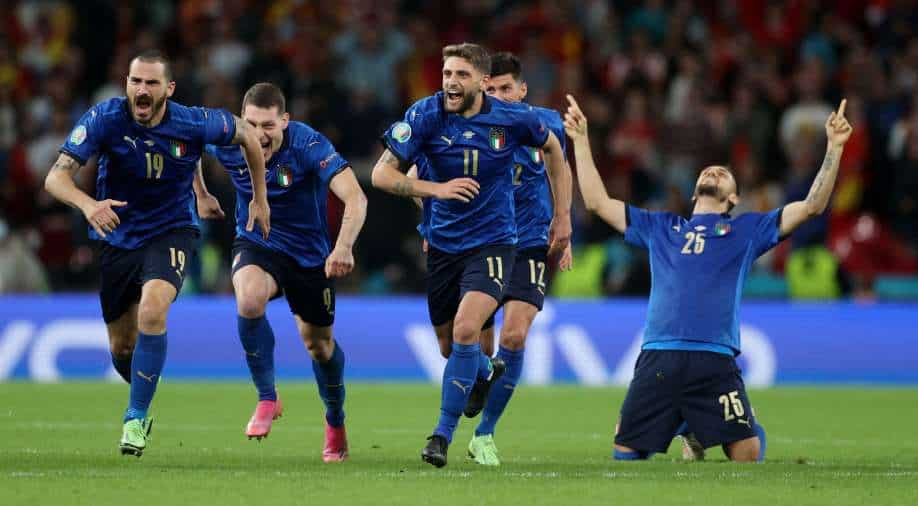 "Spain were great, they have star players but we fought until the end and we did it," said Italy's Chiesa.

Italy reached the Euro 2020 final after edging Spain 4-2 on penalties following a compelling 1-1 draw after extra time on Tuesday, completing a remarkable revival after failing to qualify for the last World Cup.

Jorginho coolly rolled the decisive kick past Spain keeper Unai Simon in the semi-final at Wembley after Alvaro Morata had been thwarted by a fine save from Italy's Gianluigi Donnarumma and Dani Olmo had blasted his effort over the bar.

Italy's substitutes and coaching staff poured on to the pitch celebrate in front of their jubilant supporters behind the goal after Jorginho's kick booked their place in Sunday's final against either England or Denmark.

Roberto Mancini's side took the lead on the hour through a sensational curler from Federico Chiesa to complete a sweeping counter-attack which began with keeper Donnarumma catching a Spain cross and rolling the ball out.

Morata, who had been dropped from the starting lineup after beginning all Spain's previous games, equalised with 10 minutes left, calmly slotting into the bottom corner after bursting forward and exchanging a one-two with Olmo.

The goal was the latest twist in an eventful few weeks for Morata, who has been booed and even faced death threats from Spain supporters after a couple of poor showings, before redeeming himself with a crucial goal in the 5-3 win over Croatia.

But his tournament ended in dismay as his tame spotkick allowed Jorginho to clinch the win for Italy, continuing their sensational run, having earned a clean sweep of victories in the group stage and knocked out top-ranked Belgium in the quarter-finals.

"Spain were great, they have star players but we fought until the end and we did it," said Italy's Chiesa.

"When (Manuel) Locatelli missed the first penalty, everyone was calm saying we can do it and at the end our group helped us in the moment."

Mancini's side are looking to win the European Championship for the first time since 1968 and secure their first major trophy since winning the 2006 World Cup.

Italy avenged their shootout defeat to Spain in the Euro 2008 quarter-finals and their resounding defeat in the Euro 2012 final, and completed a second straight European Championship victory over the Spaniards after their 2-0 win in the last 16 at Euro 2016.

Spain coach Luis Enrique could take nothing away from his side.

"They only wanted to get to penalties in extra time but we could have played for half an hour more. We can be happy and proud with what we've seen. We kept trying to play our way," he said.

"Everyone can feel proud of this team, we have many young players who have done things you couldn't imagine at their age and we were a team from start to finish."

Wembley's capacity was expanded to 60,000 and although coronavirus restrictions prevented fans from travelling abroad, the two countries' expatriate communities turned out to pack each end behind the goal and generate a scorching atmosphere, which heightened the sense of occasion between two titans of international football.

Italy made an intense start but Spain went on to dominate the first half, although Mancini's side came closest to scoring when Emerson clipped the bar right before halftime.

The second half was even more intense as gaps opened up at either end and Spain captain Sergio Busquets missed a great chance when he sent a shot just over the crossbar.

Chiesa then broke the deadlock by pouncing on a loose ball after a last-ditch tackle by Aymeric Laporte and curling into the net to score his second goal in the tournament after also netting at Wembley against Austria.

Italy could have put the game to bed, but Simon saved twice from Domenico Berardi and Morata made them pay.

Spain looked more likely to find a winner in the remaining minutes and in extra time but could not manage a second shootout victory after prevailing against Switzerland in the quarter-finals.

Once again Morata was a crucial part of the story, but not in the way he would have wanted.