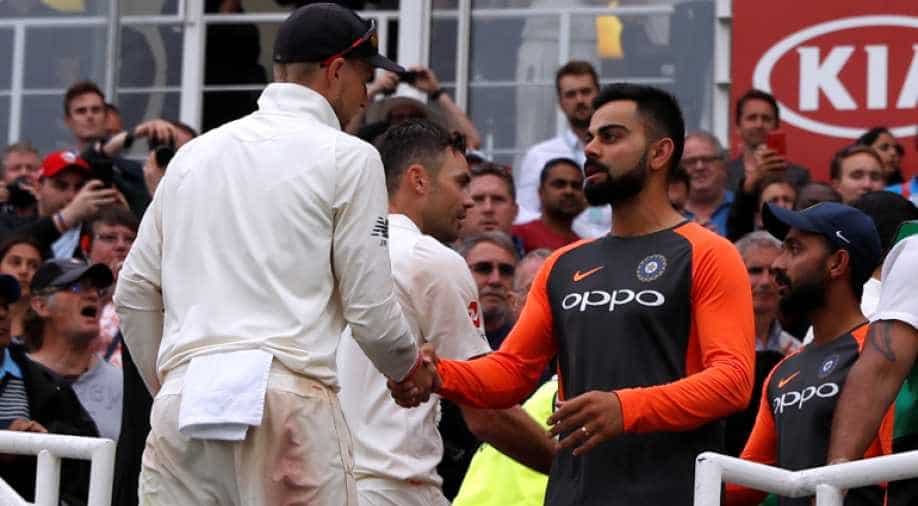 This is the first time India have lost four matches in a five-Test series since their 0-4 defeat against Australia in 1991-92. Photograph:( Reuters )

Britain finished an eventually persuading 118-run win over India and claim the series 4-1 but were made to work for their victory by centurions KL Rahul and Rishabh Pant.

With India chasing a massive 463-run target, the last day of the series saw a bit of drama as centuries by Lokesh Rahul and Rishabh Pant gave India a slim hope of clinching or at least saving the Test.

Rahul played a fighting knock of 149 runs before a spectacular delivery by England spinner Moeen Ali ended his resistance.

Pant, who scored 114, gave him excellent support from the other end as the duo built up a partnership of 204 runs to frustrate the England bowlers for a long time.

Indians were 136 runs short of the victory total when England eventually made the breakthrough, Adil Rashid belatedly coming to the party by producing a moment of magic, turning one square out of the rough to end Rahul's innings one run short of his 150.

Pant followed just two overs later when he failed to pick Rashid’s googly and was caught by Ali for 114. That wicket uncovered the tail and Sam Curran alongside James Anderson could tidy up and furnish the retiring Alastair Cook with the ideal send-off.

Along with Cook, the series also ended in a memorable fashion for pacer James Anderson as he went on to become the highest wicket-taker in Test cricket among the pacers.

Anderson surpassed Australian legend Glenn McGrath's tally of 563 wickets, taking the final wicket of the match as he dismissed Mohammad Shami for a duck, as India were bowled out for 345.

Meanwhile, India under Virat Kohli's captaincy suffered a new low with the Oval Test loss as this is the first time since their 0-4 defeat against Australia in 1991-92 that they have gone down four times in a five-match Test series. India now have lost six of their last eight Test matches away from home.

For Indian skipper Virat Kohli, he ended up as the highest run scorer by a comfortable margin. In 5 Test, Kohli scored 593 runs at an average of 59.30 including two centuries. While James Anderson went on to become the highest wicket-taker in the series as he claimed 24 wickets.