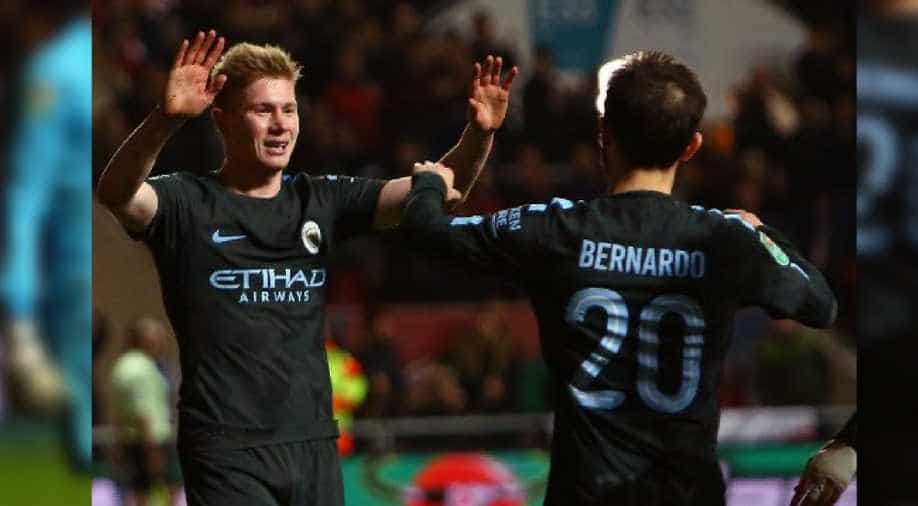 Pep Guardiola saw his Manchester City side pushed hard before defeating second-tier Bristol City in an entertaining League Cup semi-final on Tuesday to leave him one game away from winning his first major trophy in English football.

Guardiola's runaway Premier League leaders, eyeing an unprecedented season quadruple given they also remain involved in both the FA Cup and Champions League, won 3-2 on the night for a 5-3 aggregate win over the Championship side.

They kicked off with a narrow advantage at Ashton Gate after a 2-1 first-leg win at the Etihad Stadium.

But goals either side of half-time from Leroy Sane and Sergio Aguero effectively saw Manchester City to a win on Tuesday and success over the two legs as they reached their first final under former Barcelona and Bayern Munich manager Guardiola.

Bristol City was undaunted, however, with Marlon Pack pulling a goal back in the 64th minute before Aden Flint scored deep into stoppage time.

However, there was still time for Kevin De Bruyne to round off the scoring for Manchester City.

Guardiola's men will now face the winners of Wednesday's Emirates Stadium semi-final between their Premier League rivals Arsenal and Chelsea at Wembley on February 25, with the two London clubs deadlocked at 0-0 after a first-leg stalemate.

"We are so happy to be there, to reach this final," Guardiola, whose debut season as City boss last term saw him end a campaign without a trophy for the first time in his managerial career, told Sky Sports.

"We played an amazing game until 2-0 and then we lost control, these type of games never end until the end.

"This is a lesson for next weekend in Cardiff in the FA Cup and especially for the Champions League," the Spaniard warned.

"At 2-0 we knew it would be easier because they needed three or four goals but with one minute left it was 2-2 and anything could happen."

Guardiola played down the personal importance of reaching a Wembley final, saying: "It's not for me, it's for Manchester City, a club who are trying to reach another level.

"I know that we will be judged by trophies we win but we are so happy," he insisted. "Nobody can take away what we have done, but Chelsea or Arsenal are strong teams."

Meanwhile, Pack summed up the mood of the home side by saying: I'm proud of the boys and proud to be part of this team. Hopefully, we can take this into the league now and keep it going."

It looked as if Bristol City would deny Manchester City a goal in the first half of Tuesday's match.

But three minutes before the break, Hordur Magnusson made the mistake of trying to shepherd the ball out of play rather than clearing and was dispossessed near the byline by Bernardo Silva.

His cross was fired in by Sane and left Bristol City, chasing promotion to the lucrative Premier League, with a mountain to climb.

Four minutes after the re-start Aguero, Manchester City's all-time leading goalscorer seemed to put the result of the tie beyond doubt.

The Argentina striker, fresh from a hat-trick in a 3-1 league win over Newcastle United last weekend, still had plenty to do following De Bruyne's cross-field ball.

But he made light of a tight angle by letting fly with a shot into the top corner from 18 yards out.

It would have been easy for Bristol City to be overwhelmed from then on in but, to their credit, it was the southwest side who scored next, in the 64th minute.

John Stones made a mess of a clearance and when it came back into the box, Pack guided a well-directed header across Manchester City goalkeeper Claudio Bravo and into the top corner.

Flint turned in a header late on to give Bristol City fans hope of extra time but, pressing for that goal, their side were wide-open to a counter-attack, with Sane cutting the ball back for De Bruyne to fire home.