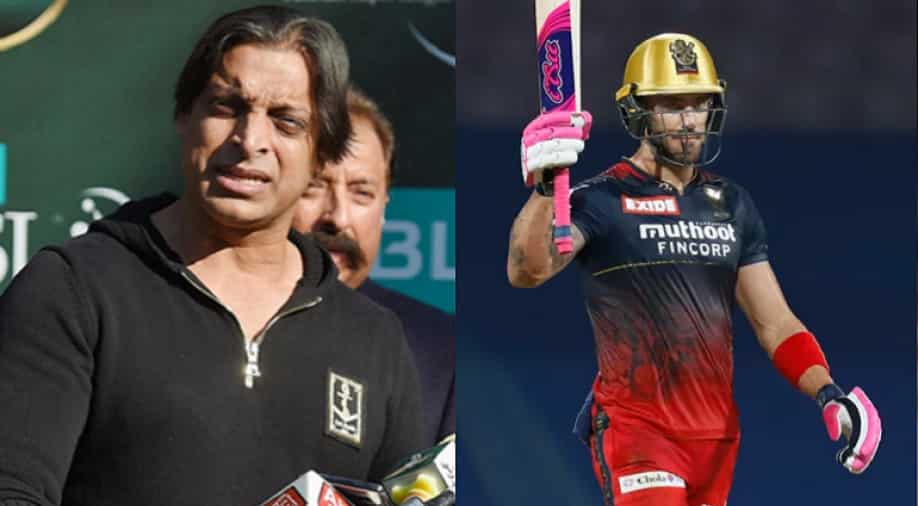 Former Pakistan pacer Shoaib Akhtar has made a bold statement about RCB captain Faf du Plessis. Akhtar feels there is nothing special about his captaincy.

Former Pakistan pacer Shoaib Akhtar said he is not a big fan of Royal Challengers Bangalore (RCB) captain Faf du Plessis. Du Plessis had replaced Virat Kohli as RCB skipper ahead of the ongoing Indian Premier League (IPL) 2022 season. While many have deemed the move a great one for the franchise, Akhtar has expressed reservations about Du Plessis' leadership qualities.

Du Plessis, who enjoyed a successful stint with Chennai Super Kings, winning a couple of IPL titles as a player, was the second-highest run-getter in IPL 2021 last year. He was roped in by RCB for a sum of Rs 7 crore (INR 70 million) at the mega auction in February this year.

The former South Africa skipper is one of the most experienced campaigners in the IPL and has been backed by many to help RCB bring an end to their title drought. However, Akhtar said he doesn't see anything special in Du Plessis as far as captaincy is concerned. The former Pakistan pacer also stated that Du Plessis doesn't look sharp as a leader on the field.

“Virat has quit leadership and Du Plessis has taken over, so he will lead in his own way. I am not a huge fan of Faf du Plessis because I don’t see anything (special) in his captaincy," said Akhtar on Sportskeeda.

“Virat has been a very unfortunate captain for both India and RCB. He tried his best, but it didn’t work for them. Having said that, Faf has a point to prove. At times, he doesn’t look that sharp during his leadership. He has been given the responsibility of leading a huge franchise, so let’s see if he is able to revive their fortunes," he added.

Du Plessis, who was roped in by CSK at the IPL 2018 mega auction after playing for Rising Pune Super Giants for two years, played an instrumental role in their success over the last few years. The former South Africa skipper has also significant experience in leading his national side in international cricket. However, Akhtar has doubts over how far can Du Plessis take RCB going forward.

“He played for Chennai for a long time and he has a good idea of how things work. However, I am not sure how far Faf will go from here. If he does that, hats off to him, but I still have my reservations," said Akhtar.

Royal Challengers Bangalore got off to a losing start in IPL 2022 as they lost their opening game against Punjab Kings by five wickets before bouncing back to beat Kolkata Knight Riders (KKR) by three wickets in a thrilling encounter. RCB will take on Rajasthan Royals in their third game on Tuesday (April 05).