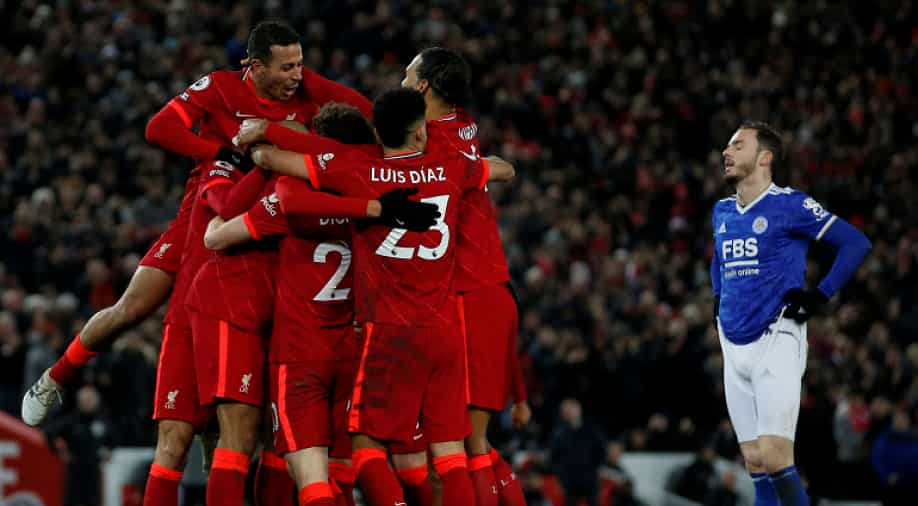 Diogo Jota scored twice as Liverpool earned a comfortable 2-0 win over Leicester City in the English Premier League on Thursday.

Liverpool closed the gap on Premier League leaders Manchester City to nine points as Diogo Jota`s doubled earned Juergen Klopp`s side a 2-0 victory over Leicester City on Thursday. After City`s 2-0 win over Brentford on Wednesday extended their advantage at the top, second-placed Liverpool needed to issue a response, edging in front in the first half at Anfield thanks to Jota`s close-range finish.

Mohamed Salah came off the bench to rapturous applause to make his first appearance since returning from the Africa Cup of Nations, with the Egyptian striker curling a sumptuous effort against the post as Liverpool pressed for a second.

That second did not look like it was going to come as chances continued to come and go, but Jota remained ruthless in the penalty area, drilling home the game-clinching goal three minutes from time.

The win moved Liverpool onto 51 points from 23 games, with leaders City having played one game more, while Leicester`s poor season continued as they remain languishing down in 12th in the standings.

"I always like to get into those spaces," Jota told BT Sport. "I was lucky enough to be in the right place and to score.

"There was obviously an established front three (at Liverpool before he joined) but we have more options now and that is good for the team."

Another of those attacking options is Luis Diaz, who was handed his Premier League debut by Klopp after signing for Liverpool during the January transfer window, with the Colombian showing off his skills to get fans off their seats early on.

Trent Alexander-Arnold forced Leicester goalkeeper Kasper Schmeichel into a fine save, before Andrew Robertson almost got on the end of a low cross at the back post.

When Liverpool finally made their pressure pay, the goal came via a familiar source, with Jota reacting quickest to Schmeichel`s save to keep out Virgil van Dijk`s header from a corner.

Leicester beat Liverpool in the reverse fixture between these teams earlier in the season, but they never looked like getting back into the game at Anfield.

Salah`s introduction re-energised the hosts, with Liverpool`s top goalscorer twice denied by Schmeichel, before then hitting the woodwork.

The dazzling Diaz was then next to be denied by Schmeichel, before Jota made one count, squeezing his 12th league goal of the season home to put the game to bed.

Liverpool, the only remaining Premier League side yet to lose on home soil this season, have now won 11 of their last 15 league games at Anfield.