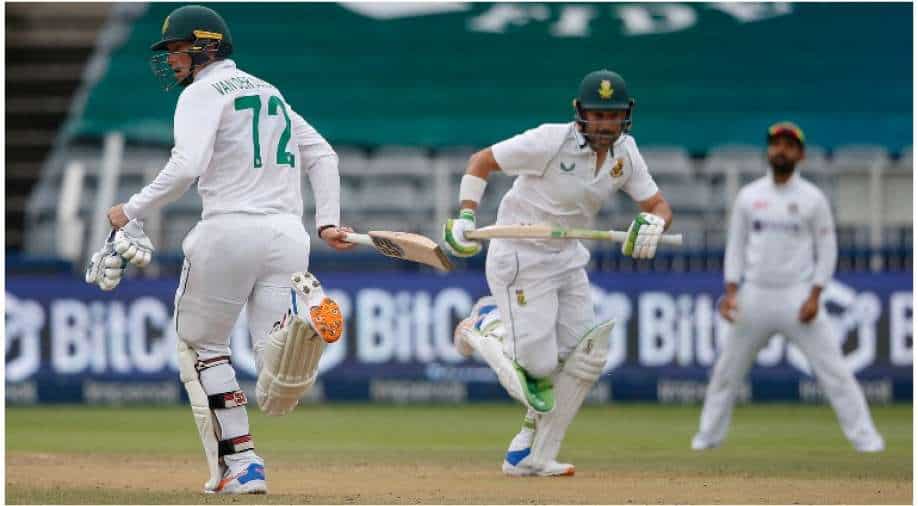 India vs SA, 2nd Test: On a rain-marred Day 4, Dean Elgar led the charge with an unbeaten 96 to take Proteas to a famous 7-wicket win as the three-match series is now levelled.

The second and penultimate Test between India and South Africa, at The Wanderers, Johannesburg, ended on Thursday (January 6) with Dean Elgar-led hosts beating KL Rahul's India by 7 wickets. After rain interruption and wet outfield led to a considerably delayed start to the fourth day's proceedings, Elgar's unbeaten 96 led the charge for his side single-handedly as the home side cruised to an emphatic win to level the series.

At stumps on Day 3, Proteas needed 122 more (in pursuit of 240) whereas India were in search of 8 more wickets to take an unassailable lead in the three-match series. However, Elgar's captain's knock propelled his side to the third-most successful run-chase at the venue (highest successful run-chase for the hosts at The Wanderers).

ALSO READ | Dravid must have given him a hearing: Gavaskar on Rishabh Pant's shot selection on Day 3 of J'burg Test

While many thought that the Indian bowlers would cherish bowling in overcast conditions, on Day 4, on a difficult batting track, they got only one wicket in the form of Rassie van der Dussen (40) before Elgar-Temba Bavuma's unbeaten 68-run stand took the Proteas past the finish line.

With this, the series is interestingly poised at 1-1 with the third and final Test at Newlands, Cape Town on January 11. India will hope to see the return of regular captain Virat Kohli, who missed the second Test due to upper back spasm. The Asian side still remain in contention to win their maiden Test series on South African soil.

Opting to bat first in the J'burg Test, India had made 202 on the opening day whereas Shardul Thakur's seven-fer restricted the hosts for 229 in reply. Despite trailing by 27 runs, India made a competitive 266 in their second essay for SA to chase 240. However, Elgar showed the way as the other batters rallied around the skipper, showed more determination and will-power to beat India and keep the series alive.