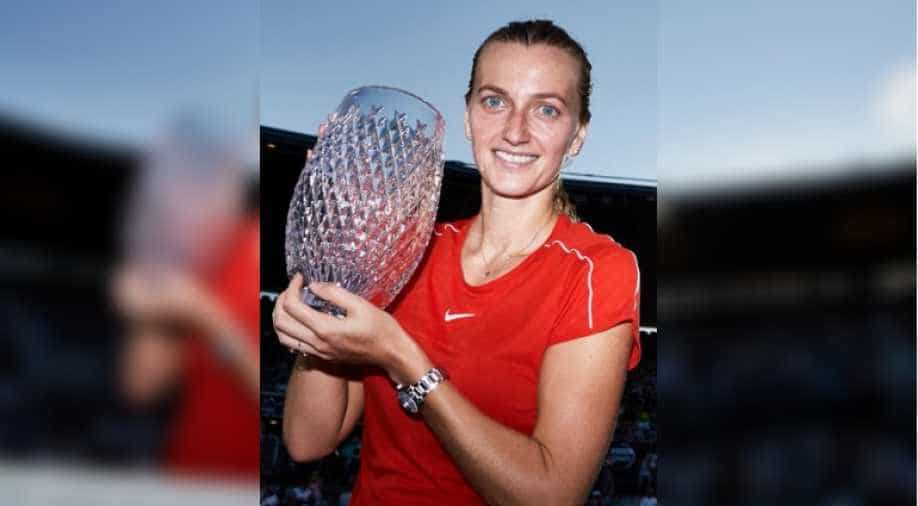 Kvitova, the 2015 champion, surrendered her serve in the opening game and struggled to recover from her poor start, with the Czech's usually lethal backhand disintegrating amid a flurry of unforced errors in the first set.

Petra Kvitova warmed up for the year's first Grand Slam by coming from behind to beat home favourite Ashleigh Barty 1-6, 7-5, 7-6(3) and win her second Sydney International title on Saturday.

Kvitova, the 2015 champion, surrendered her serve in the opening game and struggled to recover from her poor start, with the Czech's usually lethal backhand disintegrating amid a flurry of unforced errors in the first set.

The world number eight hit her stride in the second, staying within touching distance of Barty until pouncing to take a 6-5 lead with a late break of serve and holding to force a decider.

"Ash, I know it's a tough one. For sure, it's hurting not to win at home," Kvitova said after closing out the match in two hours, 19 minutes. "One day you're going to make it for sure, so good luck in the Aussie Open and well done this week."

"Thank you for everything!"

Kvitova made 45 unforced errors to Barty's 33, but struck 31 clean winners, nine more than her opponent, as she edged the contest from the back of the court.

Barty, ranked 15th in the world and a losing finalist in Sydney last year, has a reputation for being a fighter and called on every last ounce of grit to force another early break and take a 3-0 lead at the start of the third.

Yet Kvitova showed plenty of fight of her own, clawing her way back to 3-3 despite struggling with an apparent injury and, with her backhand finally firing, broke again to give herself a chance to serve for the championship.

Incredibly, the momentum shifted once more, with Barty breaking the Czech to love to keep her hopes of a first Sydney title alive, but the Australian's composure deserted her as she lost the next game on serve to give Kvitova another chance.

Once again, the Czech fluffed her lines, surrendering her serve with successive double faults to send the match into a tiebreak but clung on grimly to carve out a championship point that she claimed with a blistering crosscourt forehand.

"I left everything out here but it wasn't quite enough," Barty said. "Sorry I couldn't get it done today."

This year's tournament is likely to be the last Sydney International -- a competition with a history dating back to 1885 -- in its current format, with the ATP Cup coming on board next season.