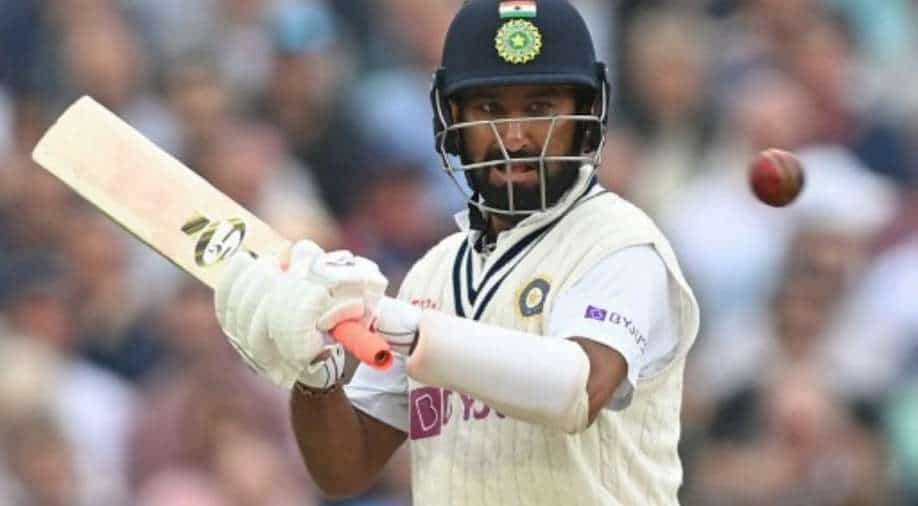 File photo of India's Cheteshwar Pujara on the third day of the fourth cricket Test match between England and India on September 4, 2021. Photograph:( AFP )

Former Yorkshire cricketer Azeem Rafiq made serious allegations of "institutional racism" and bullying at the English club, sending shockwaves through the cricketing world. The cricketer believed that his revelations will probably open the floodgates for other victims.

England and Wales Cricket Board (ECB) promised to investigate the claims after Rafiq opened up about discrimination within the English game in a compelling testimony. He even told the British lawmakers on Tuesday (November 16) that he had lost his career to racism.

In the latest fallout, Somerset seamer Jack Brooks, who dubbed Indian batter Cheteshwar Pujara 'Steve' while they played for Yorkshire has apologised to the Indian star.

Rafiq gave examples of some former teammates who had used racial slurs towards him, also talked about how fast bowler Jack Brooks had named Pujara 'Steve' because he struggled to pronounce the India star's forename.

Brooks in a statement issued on Thursday (November 18) said, "With reference to my naming in Azeem Rafiq's statement to MPs this week, the use of the name 'Steve' related to some people having difficult names to pronounce."

"When this has occurred in the past in a dressing room environment, it has been commonplace to give nicknames, regardless of creed or race."

"I admit to having used it in this context and now accept that it was disrespectful and wrong to do so. I have reached out and apologised to Cheteshwar for any offence that I have caused him or his family. At the time I didn't recognise this as racist behaviour, but I can now see that it was not acceptable," he added.

Brooks also apologised for using the word "n***o" in a conversation on Twitter in 2012 with England bowler Tymal Mills and Stewart Laudat, with whom he played minor counties cricket for Oxfordshire.

"I acknowledge that the language used in two tweets I made in 2012 was unacceptable and I deeply regret using it," said Brooks.

"It is my understanding that neither individual was offended at the time, but I accept that language is important and that a word I used may have caused offence to others," Brooks added.

Watch this old video, When Pujara had talked about the same:

"As a result of our internal investigation, alongside the evidence given to MPs this week and now in the public domain, the Club have spoken with Jack at length about the nature and content of his comments. There is no doubt that these comments are unacceptable."

"Somerset CCC condemn the use of language which has any racist connotations. Jack agrees with this sentiment and is embarrassed and devastated that his comments offended people and he has acknowledged that, whilst they were made nearly a decade ago when he was less mature, the content of the posts was wrong and not in accordance with his personal values. Jack has engaged honestly and openly throughout the investigation and unreservedly apologies for his past errors."

"Before arriving at conclusions, the Club considered a number of factors including no evidence of repeated documented behaviour of this kind, the contrition shown by Jack throughout the process, feedback received from recipients of the social media posts, and his commitment to his own personal development."

"Given these considerations, the Club has decided to reprimand Jack, remind him of his responsibilities and require him to participate in extensive training on Equality, Diversity and Inclusivity."