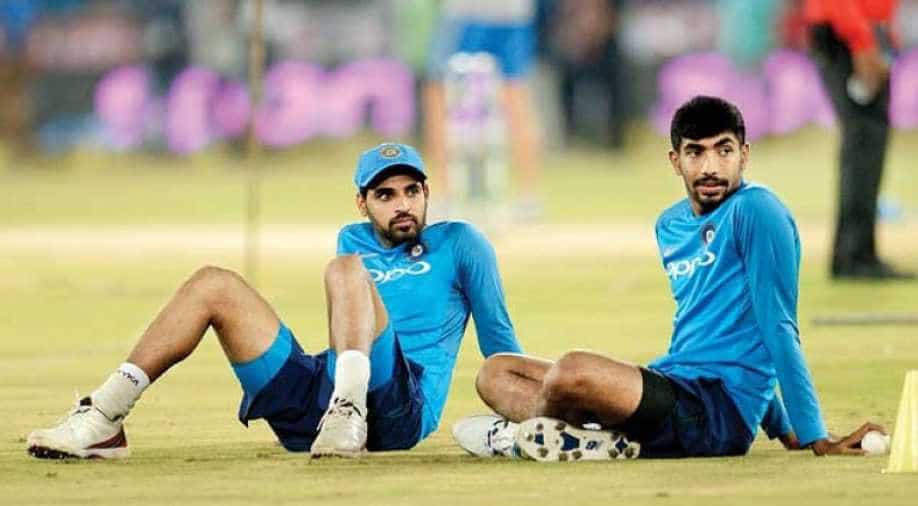 Ahead of the three-match ODI series opener against South Africa, Bhuvneshwar Kumar said that the Indian players are thinking about not using saliva to shine the ball

The entire world has been left shaken by the novel coronavirus with the number of worldwide cases surpassing 120,000-mark on Wednesday.

Also Read: All Italian sporting events including Serie A suspended due to coronavirus outbreak

While the sporting world has taken a massive hit after the coronavirus outbreak with numerous tournaments being called off, there are also dark clouds hovering over the future of Indian Premier League (IPL) 2020.

Even though there is still time for IPL 2020, which is set to commence from March 29, all eyes will be on the three-match ODI series between India and South Africa starting from Thursday in Dharamsala.

Ahead of the three-match ODI series opener against South Africa, Bhuvneshwar Kumar on Wednesday said that the Indian players are thinking about not using saliva to shine the ball.

The senior Indian seamer further said that a final call will be taken during the team meeting on Wednesday evening while adding the players will follow whatever the team doctor advises them to do.

"We have thought about this thing (not using saliva)," the Indian medium-pacer said.

“We have thought about this thing (not using saliva) but I can’t say right now we will not use saliva because if we don’t use saliva then how will we shine the ball. Then we will get hit and you people will say you are not bowling well,” the 31-year-old pacer, who is returning to the team after recovering from sports hernia surgery, said during the pre-match press conference ahead of the first ODI in Dharamsala.

“But it’s a valid point and let’s see we will have a team meeting today and whatever instruction we get or whatever is the best option we will do. It all depends on the team doctor and what advise he gives us,” he added.

Football leagues like Serie A (in Italy) have been suspended until at least April 3 whereas some matches of the UEFA Champions League (UCL) and UEFA Europa League (UEL) will be played behind closed doors.

In India, the ISSF Shooting World Cup, which was to hosted by Delhi, has been already postponed and fingers are being pointed towards the Board of Control for Cricket in India (BCCI) on whether they will take any step to safeguard the health of the players.

With coronavirus cases rising to at least 60 in India, there is a sense of panic among the citizens. While BCCI president Sourav Ganguly has maintained that the IPL will go as per the schedule, Bhuvneshwar is of the view that nothing can be said at this point when it comes to the fate of IPL 2020.

“You cannot say anything right now because it’s taking a dangerous situation in India. But we are taking every precaution we can take. We have a team doctor with us and he is giving us instructions about dos and don’ts. So we hope it won’t go (spread) much further,” Bhuvneshwar said.

"We cannot avoid fans because they love us," he added.

Just like the South African team, Indian players have been advised to stay away from fans and not indulge in fan-activities like taking selfies, giving autographs, to name a few. Bhuvneshwar confirmed that that team doctor has asked them to maintain personal hygiene and to not get closer to the fans.

However, Bhuvneshwar further said that the players can't stay away from fans as they support them.

“Few dos and don’ts which the team doctor wants us to do. Simple things like maintaining hygiene, keep washing your hands regularly and not going closer to fans and all those things. But we cannot avoid fans because they love us, they support us. In the meantime, we can try and not get too much closer to them. We can avoid as much as we can,” the 30-year-old added.

India and South Africa are set to take the field at the Himachal Pradesh Cricket Association Stadium in Dharamsala for the first ODI on Thursday (March 11).

The second ODI of the three-match series is scheduled to be hosted by Bharat Ratna Shri Atal Bihari Vajpayee Ekana Cricket Stadium in Lucknow on March 15 followed by the final match of the series at the iconic Eden Gardens in Kolkata on March 18.