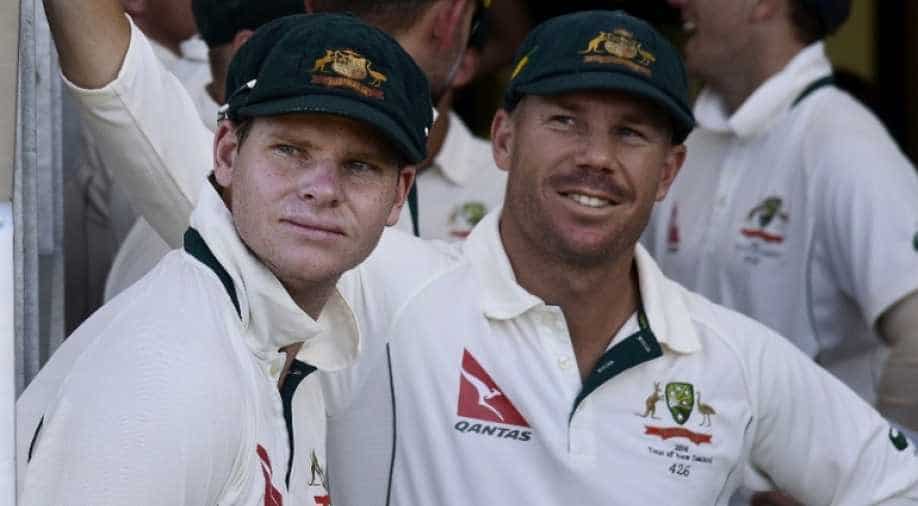 In a taste of what to expect from British crowds, they doctored an image of Warner's official World Cup player portrait, replacing 'Australia' on the front of his shirt with 'Cheats'

Australia coach Justin Langer said his team won't be rattled by a hostile reception at the World Cup as England's Barmy Army gave them a taste of what to expect.

The defending champions are on a hot run of one-day form and have been boosted by the return of Steve Smith and David Warner after their one-year bans for ball-tampering.

But a trip to England is never easy, and the visit for the World Cup -- followed by an Ashes Test series -- is shaping up to be even more challenging than usual after the cheating row.

England's fiery Barmy Army supporters rarely need much incentive to get stuck into their arch-rivals and got the ball rolling on Twitter Thursday with a brutal pot shot.

In a taste of what to expect from British crowds, they doctored an image of Warner's official World Cup player portrait, replacing 'Australia' on the front of his shirt with 'Cheats'.

Smith, Warner and Cameron Bancroft were all banned over the scandal last year in Cape Town involving sandpaper to alter the ball.

"The World Cup might be a bit different to start off, but certainly once the Ashes kicks off there will be plenty of commentary", he added.

Warner returned to the Australian team this week after prolific form at the Indian Premier League, while Smith stroked an unbeaten 89 in Brisbane against a New Zealand XI on Wednesday.

Langer said Warner "has got this look in his eye at the moment" while praising Smith's innings as a "tutorial in batting".

"It's great for the team, I can honestly say I don't think we could be in a better position'', he added.

"It's a bit like facing fast bowling, you worry, worry, worry and once you get out in the middle, it's ok. The worst time to face fast bowling is in bed the night before", Langer said.

"There's been a huge lead-up to this (Smith and Warner's return) and the boys have come in so far quite seamlessly", Australian coach said.

Heading into this week's 'unofficial' three-match one-day practice series against a New Zealand XI, Australia had won eight one-dayers on the trot, against India and Pakistan.

They won the opening match against New Zealand before losing the second.

The games are not counted as full internationals.

"My main concern is we've had a month's break at the end of the Pakistan series," Langer said.

"Guys were weary at the end of long taxing summer but we were match-hardened and battle-hardened and had a great sense of confidence. We're working back up towards it. That's why we're having these practice games", Langer added.