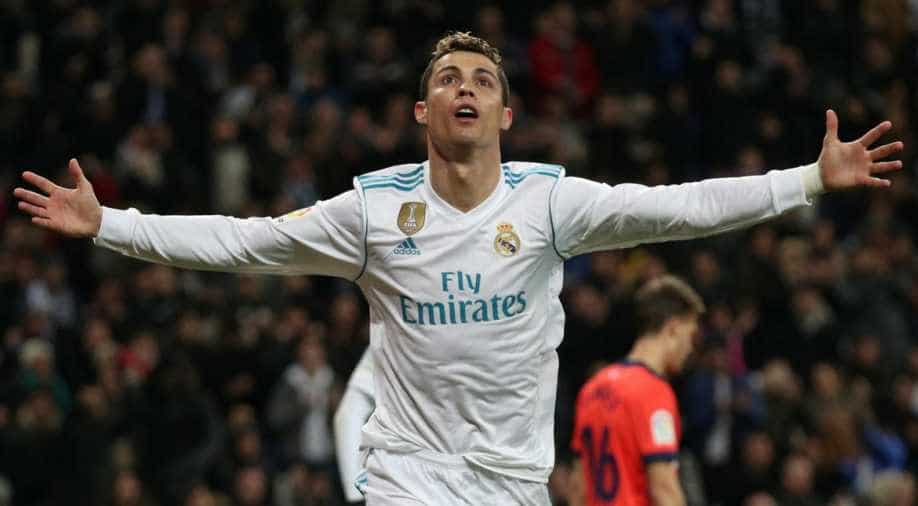 Cristiano Ronaldo, a hero of the Leg 1 looks to stretch the aggregate gap. Photograph:( AFP )

Football is a game of uncertainties, it is not justified to predict the performance of any team and pass the judgement regarding the final result of the game.

The second leg of Champion's Trophy is starting from today with one of the most crucial face-offs when a Spanish giant will fight with French leaders.

Defending champion Real Madrid will enter the game with a high because they have already taken a 3-1 lead against Paris Saint Germain in the first leg and the aggregate after including today's score will act as an decider that which team will proceed further.

PSG has the potential and might dribble the comeback and display a shocker in forfeiting the first-leg deficit against Real Madrid. Yes, chances are there!

PSG are up against it, all the more so with Neymar, the world's most expensive player missing as he recovers in Brazil following a foot operation.

Paris​ have lost just one of their last 46 European home games ????

Are they strong enough to see off Madrid?

Brazil's Paris St Germain forward Neymar has had a successful operation on his injured foot and ankle.

He was operated on Saturday at the Mater Dei Hospital in Belo Horizonte and currently on post-op rehabilitation. Neymar's absence is a major important implication in today' match.

Out of contract at the end of this season, Emery is relying on big performances from players like Thiago Silva and Angel Di Maria, who were both left out in the first leg.

Kylian Mbappe is looking good at the moment with some outstanding assists in the previous matches.

Cristiano Ronaldo had scored twice as Real Madrid came from behind to stun Paris Saint-Germain 3-1 in the first leg of their heavyweight Champions League to inspire the team to victory at the Santiago Bernabeu. The team has travelled to Paris to play the match at Parc des Princes. A memorable stadium when Di Stefano lifted the club's first continental crown.

Which one of your friends is always trying tricks like @Cristiano? ????#UCL pic.twitter.com/XGpD9tj3C0

Captain Sergio Ramos said, "The Champions League means a lot to us,"

"They have a lot of offensive power, but we have our weapons and we're going to try to do damage in Paris," he further added.

Marcelo has returned from injury and he is a big advantage for the team.

This clash takes on huge importance for Zinedine Zidane’s Real, who have had an unusually poor domestic campaign and faced many criticisms for the same even his future as Real coach was doubtful.

As far as the final result is concerned, Real Madrid definitely has an intent of winning the game but PSG's attacking is equally great and might register a comeback and draw the aggregate.