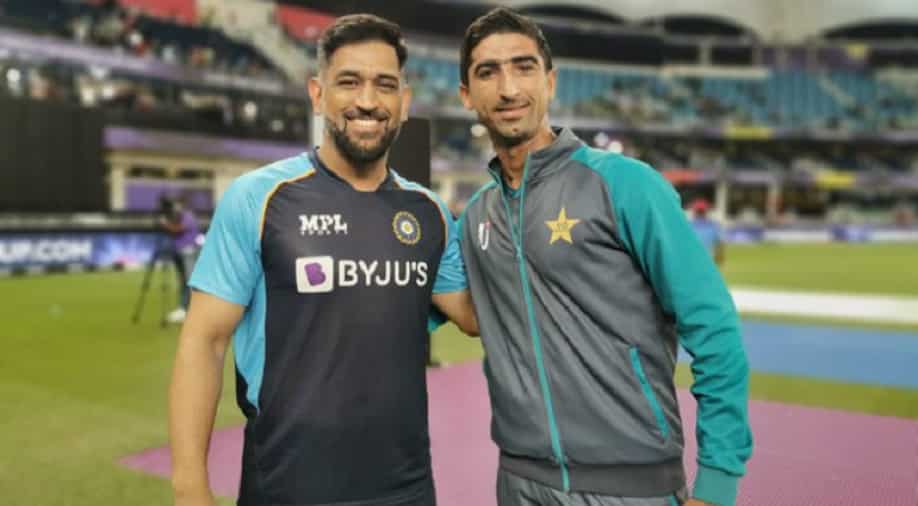 It was a dreamy night for the Pakistan players as they rejoiced their first win over arch-rivals India in a World Cup encounter. India's flawless unbeaten streak of 12 matches in the Cricket World Cup came to an end with a crushing 10-wicket defeat at the hands of Babar Azam & Co. in Dubai in the ongoing T20 World Cup 2021 on Sunday (October 24).

It was a one-sided affair as Pakistan restricted India for a moderate 151 and chased down the target with 13 balls to spare. It was a special occasion for Pakistan pacer Shahnawaz Dahani despite him not being part of Pakistan's playing XI in the memorable clash.

While he was happy to see Pakistan earn their maiden win against India in a World Cup game, Dahani was also elated to meet India legend MS Dhoni. Calling Dhoni his dream player, Dahani took to Twitter to state that the night was not to be forgotten.

Dhoni, who is regarded as one of the best captains of all time in world cricket, was seen interacting with Pakistan players at the end of the T20 World Cup clash between India and the Men in Green in Dubai. Dahani was among the group of Pakistan players, who got a chance to pick Dhoni's brain.

"What a night it was, Happiness of Pakistan's Victory and excitement of meeting one of my dream player @msdhoni can't be forgotten," Dahani wrote on Twitter while sharing a picture with Dhoni.

what a night it was, Happiness of Pakistan's Victory and excitement of meeting one of my dream player @msdhoni can't be forgotten. pic.twitter.com/CWQjm4vDKa

Also Read: Virender Sehwag reacts to firecrackers being burst in 'parts of India' to celebrate Pakistan's win in T20 WC

Batting first, India got off to a poor start as they lost both openers KL Rahul (3) and Rohit Sharma (0) cheaply before skipper Kohli's 57 and Rishabh Pant's 39 helped India reach 151 runs on the board in 20 overs. In reply, Pakistan made light work of the run-chase and chased down the target with 13 balls to spare.

Openers Babar Azam (68) and Mohammad Rizwan (79) scored unbeaten half-centuries to take Pakistan home comfortably and get the Men in Green off to a winning start in the tournament.