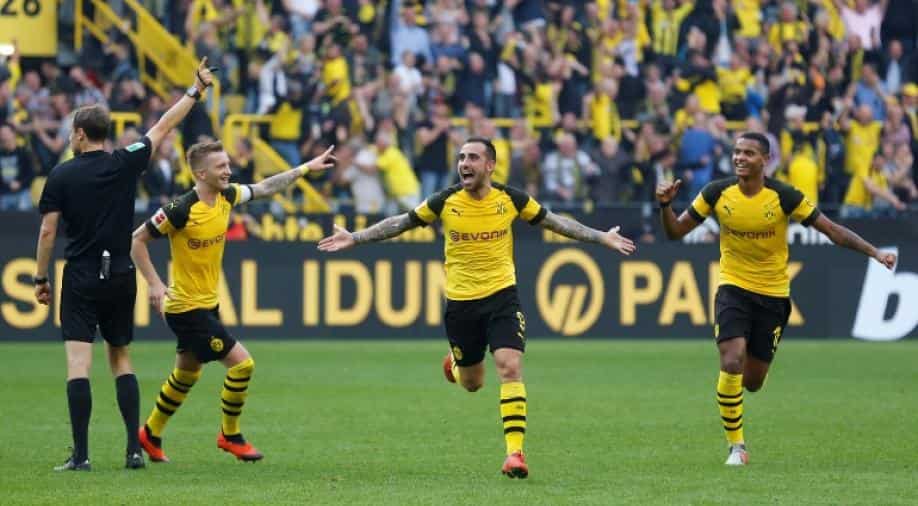 Dortmund, the only unbeaten team after seven games, lead with 17 points, three ahead of Moenchengladbach, Werder Bremen, and Hertha Berlin, who beat Bayern last week and drew 0-0 at Mainz 05 on Saturday.

Borussia Dortmund stayed top of the Bundesliga by beating Augsburg 4-3 thanks to a remarkable 30-minute hat-trick from substitute Paco Alcacer on Saturday while titleholders Bayern Munich were thumped 3-0 at home by Borussia Moenchengladbach.

An extraordinary see-saw match in Dortmund produced four goals in the last 10 minutes as the hosts hit back from 2-1 down to lead 3-2, defiant Augsburg equalised and Alcacer grabbed the winner with the last kick of the game.

Bayern, on the other hand, fell two goals behind in the first 16 minutes as they slumped to their fourth match without a win in all competitions -- a crisis by the exacting standards of the Bavarian side.

Alcacer, on loan from Barcelona, has scored a remarkable six goals in three league appearances, all of them as substitute, and a total of 81 minutes' playing time.

Alfred Finnbogason gave Augsburg a halftime lead before Alcacer scored with his first touch in the 62nd minute, three minutes after coming on, as he turned in Jadon Sancho's pass following a lethal counter-attack.

Philipp Max volleyed Augsburg back in front before Alcacer levelled again in the 80th minute, getting away from his marker to latch on to a free kick and score with a shot on the turn.

Michael Gregoritsch headed Augsburg level from a corner in the 87th minute but the drama was still not over.

Augsburg substitute Sergio Cordova clumsily gave away a free kick with a high challenge and Alcacer curled his shot around the wall in the fifth minute of stoppage time.

"It was not our best game, but it was fantastic for the spectators and for us. We kept trying; it was very hard to find a few gaps and Augsburg are very dangerous," said Dortmund coach Lucien Favre.

Dortmund, the only unbeaten team after seven games, lead with 17 points, three ahead of Moenchengladbach, Werder Bremen, and Hertha Berlin, who beat Bayern last week and drew 0-0 at Mainz 05 on Saturday.

Gladbach have often been Bayern's tormentors over the last few years and so it proved again.

Alassane Plea fired home from the edge of the penalty area following a quick exchange of passes in the 10th minute and Lars Stindl fired the second after Jonas Hofmann dispossessed Thiago Alcantara as he tried to play the ball out of defence.

Bayern dominated possession only to be caught out again on the break as Patrick Herrmann fired the third with two minutes left, the goal being confirmed by a VAR review.

"I said a few words to the team but that should stay in the dressing room," said Bayern coach Nico Kovac who is in his first season in charge.

"We made too many individual mistakes. Sometimes you have good times, then you have bad times, everybody is trying but at the moment it is not working out. You have to work as a unit, with the ball and without the ball."

American midfielder Weston McKennie, who scored a late winner at Lokomotiv Moscow in the Champions League on Wednesday, followed up by grabbing his first Bundesliga goal for Schalke 04 to set up a 2-0 win at Fortuna Duesseldorf.

The 20-year-old, playing his 28th league match for the Royal Blues, turned in Suat Serdar's pass at the near post three minutes into the second half and Guido Burgstaller added the second.

It was Schalke's second win in a row after they lost their five opening games.

Bobby Wood completed a good day for U.S. players by scoring a brace to give Hanover 96 their first win of the season and lift them off the bottom with a 3-1 win over VfB Stuttgart.

Ihlas Bebou was also on target for Hanover and Mario Gomez replied for Stuttgart.