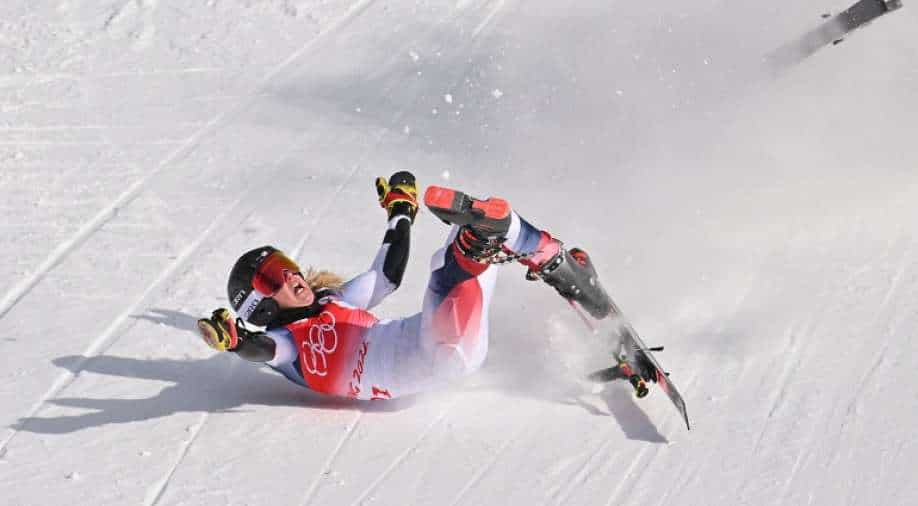 USA's Nina O'Brien falls in the second run of the women's giant slalom during the Beijing Games Photograph:( AFP )

Organisers were forced to postpone the Alpine mixed team parallel race due to strong winds in Beijing Winter Olympics 2022.

Organisers scrambled to reorganise the Alpine mixed team parallel race for the final day of the Beijing Olympics after high winds on Saturday forced the competition to be postponed.

Team officials and organisers agreed to hold the event, which is only its second edition, on Sunday at 9 a.m. (0100 GMT) despite several teams being scheduled to fly home.

The decision is likely to mean some teams have to rearrange their flights and accommodation bookings but it was not immediately clear if all would remain to compete.

Alpine team officials will hold their usual pre-race "captains' meeting" at 5 p.m. when the start list will be agreed upon, and only then will it be clear how many of the 15 teams will remain in the rescheduled event.

Olympics and International Ski Federation (FIS) officials were keen to avoid the complications that would come with the rare case of an event not being held.

Juan Antonio Samaranch, the head of the International Olympic Committee's coordination commission for Beijing, told the IOC session that these issues were to be expected at a Winter Games.

"We had weather issues but this is Winter Games. We are coping with the difficulties still left but this is winter and we are here to celebrate exactly that: winter," he said.

The closing ceremony for the Beijing Games is on Sunday at 8 p.m. The weather forecast for Sunday is for slightly better wind conditions earlier in the day.

On Saturday at 9 a.m., gusts were recorded as between 24 and 28 metres per second. On Sunday gusts are forecast between 19-22 m/s at that time.
The weather also disrupted competition at the National Cross-Country Centre in Zhangjiakou.

The men's 50 km cross-country mass start, one of the sport's blue riband events, was postponed by an hour and shortened to 30km due to the high winds.

Not everybody in the field was happy with the decision.

"Of course athletes health comes first but we knew it was gonna be cold .... Look to other sports who moved their events a day earlier. This is not the way to go if we want to develop our sport!" Irish skier Thomas Maloney Westgaard tweeted.

The men's freeski halfpipe final went ahead but gusts of wind kicked up snow and skiers lost momentum on the pipe, with several crashing, as temperatures dropped to minus 22 Celsius (minus 7.6 Fahrenheit).

"It was gnarly today. And there wasn't even a discussion about postponing or waiting a little bit or anything," British skier Gus Kenworthy said.

The women's 12.5 km biathlon event, originally scheduled for Saturday, was brought forward to Friday due to weather concerns.