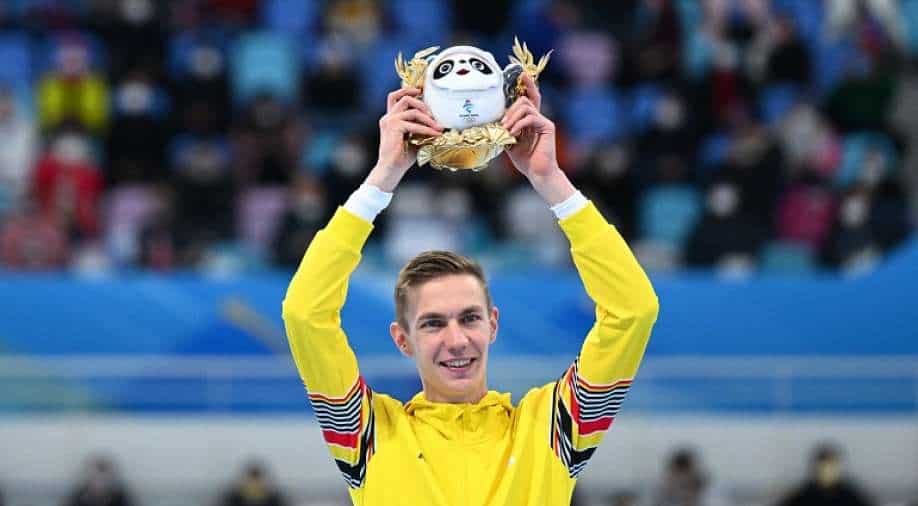 Belgian Bart Swings beat rivals in a blistering skate rounding the final corner of the men's mass start at the Beijing Olympics on Saturday to win his country's first Winter Games gold medal in 74 years.

The silver medallist from Pyeongchang initially hung back before the race turned into a blistering sprint to the finish line.

Still in second place, Swings skated for his life as he rounded the final corner to overtake bronze medallist Lee Seung Hoon and thrust his legs out at the finish line in desperate hopes to be the first to cross it.

He immediately looked up to see the results, and threw his hands up in delight when he saw that he had clinched the first Belgian Winter Games gold since 1948 when Micheline Lannoy and Pierre Baugniet won in the pairs figure skating competition.

"It's historical and it's unbelievable," the 31-year-old said after his race.

"I always want to raise the bar and the next thing after silver is gold. I know it was ambitious and it's a dream to work towards. I knew today everything could happen so I was just going to go as hard as possible and eventually I achieved it," the three-time Olympian added.

In a sport that has been long dominated by the Netherlands, Swings was also the first Belgian-born speed skater to stand on the podium at the Winter Games when he won silver in Pyeongchang in the same event.

"I had a lot of pressure for myself because I had a goal and I wanted to achieve it," Swings said.

"But I also know at the mass (start) everything can happen so I was super nervous the last days last week, because once you have that medal you know how bad you want it again," he added.

In the final frenzy of the race, Chung Jae Won of South Korea took a separate, inner line to come in second and claim the silver.

Chung's compatriot Lee looked set for gold as he rounded the last corner, but lost steam in the last stretch as he was overtaken by Swings and landed bronze instead.