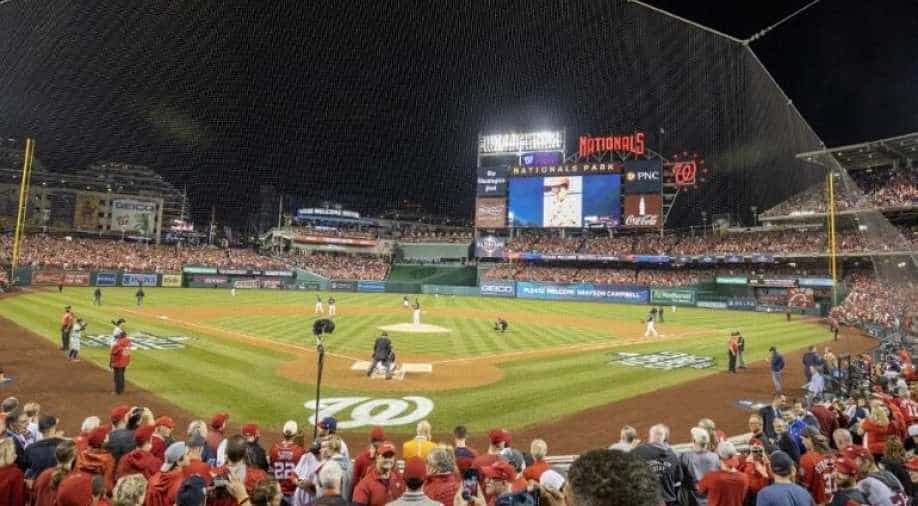 General view of Game 5 of the World Series between the Washington Nationals and Houston Astros at Nationals Park in Washington, DC. Photograph:( AFP )

Howie Kendrick and Anthony Rendon blasted home runs and the Nationals rallied from two runs down after six innings.

The Washington Nationals completed one of the most shocking championship runs in Major League Baseball history Wednesday by defeating Houston 6-2 to capture the US capital's first World Series title since 1924.

Howie Kendrick and Anthony Rendon blasted home runs and the Nationals rallied from two runs down after six innnings in the winner-take-all showdown to claim the best-of-seven final 4-3.

Astros starting pitcher Zack Greinke mystified the Nationals for 6 1/3 innings, allowing only one hit while Yuli Gurriel hit a solo homer and scored on a Carlos Correa single to give Houston a 2-0 lead.

Houston native Rendon, however, smashed a solo homer over the left-field wall off a Greinke changeup in the seventh, sending him to the showers after walking Juan Soto.

Kendrick followed by smacking a fastball from Astros reliever Will Harris off the right-field foul pole for a two-run homer that put the Nats ahead to stay.

Washington added an insurance run in the eighth when Adam Eaton walked, stole second and scored on a Soto single.

In the ninth, Eaton singled with the bases loaded to drive in two more runs and all-but seal Houston's fate.

Patrick Corbin threw three shutout innings and allowed only two hits in relief of Max Scherzer and Daniel Hudson ran down the Astros in order in the ninth to complete the victory.