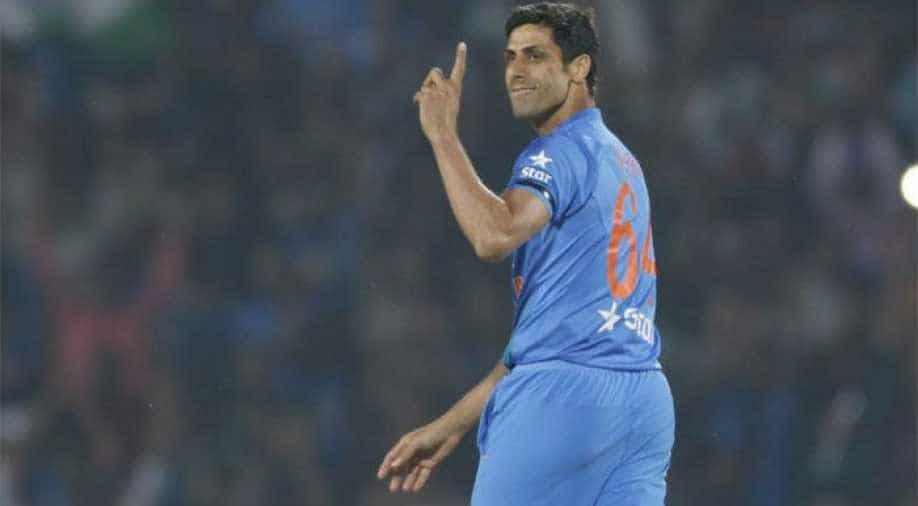 Nehra expresses his emotions by recalling the past Photograph:(PTI)
Follow Us

The left-arm fast bowler had many hiccups in his almost 18-year-long cricket journey. The fast bowler has been hit with a long string of injuries right through his cricketing career. There were also years when he was not selected for the Indian team.

Ashish Nehra bowled his last ball at the Feroz Shah Kotla Stadium, also his home ground, where the Virat Kohli-led team thrashed New Zealand by 53 runs in the first of three Twenty20 internationals.

India's veteran speedster Ashish Nehra, who retired from all forms of cricket on Wednesday, said that he has no regrets in his 18-year-long cricket journey.

It was a historical day for India as they broke the spell against Kiwis to establish their first T20I win against them and also for Nehra as he bid adieu to his career on the ground where it all started.

"It is an emotional moment. I am lucky that I bid adieu to cricket from my home ground. I still remember 1997, when I bowled my first over," Nehra told the media while recalling his cricket years.

The heavy-hearted 'Indian Cricket's Jon Snow' said, "It's not how you start, it is about how you finish. I don't think I can get better than this."

"For me, those fifteen people inside are the most important. As long as they are asking me to play more and want me in the team, that what is most important for me. I am happy that they still value me," he further said.

The left-arm fast bowler had many hiccups in his almost 18-year-long cricket journey. The fast bowler has been hit with a long string of injuries right through his cricketing career. There were also years when he was not selected for the Indian team.

Talking about the years when he was not picked for the team, Nehra said, "I never asked questions to team management and selectors. They didn't pick me, it was entirely their call. You can't blame someone for not picking you. But if you are good, your chance will come, but you have to be ready for it. I was ready for it. Now, I am playing for last two years, doing well and getting this kind of farewell. So maybe this is God's payback for my hard work."

Nehra said that he grabbed his chance with both the hands.

"There were difficult times in between. For good six months in 2007, I didn't bowl a single ball even in the nets. I had ankle surgery and ten-eleven surgeries. It wasn't easy, but then I am a very content guy. I always see the positive things," he added.

The 38-year-old also said that India is more of a star-loving country than a sport-loving one.

Asked about the captain under whom he played enjoying most, Nehra said, "I never like to compare. I have played under Saurav Ganguly, M S Dhoni, Virat Kohli. Everybody is different, it is difficult to compare."

Talking about his future plans after retirement, the fast bowler said, "I know only cricket. I haven't decided what I will do next. I will sit and relax and think."

The left-arm fast bowler made his international debut way back in 1999 against Sri Lanka in Colombo.

He was also a part of the young Indian brigade that played the 2003 World Cup.

The mates bid adeau to the player and talking to twitter, Indian Cricket team captain, Virat Kohli wished Nehra luck for his future.

Another good win and a complete team performance. ??????
Wishing Ashish bhaiya all the luck for everything in the future. It's been an honor sharing the field and the dressing room with you. ???? @BCCI #INDvNZ #NehraJi pic.twitter.com/hfCTHfo8rP

End of an era , Ashish Nehra. Congratulations on a fighting and wonderful career. Wish you the best , Ashish.

Great win, #TeamIndia! Nice to see a well deserved farewell for #AshishNehra. Wish you & your family the best of health & happiness in life?? pic.twitter.com/Ml9zFUWCpz

Harbhajan singh also congratulated Nehra for the win and wished him for his future. Also posted a picture of doing bhangra.

The Indian star bid adieu from the game with a tally of 235 wickets from 164 matches across all the formats in international cricket.