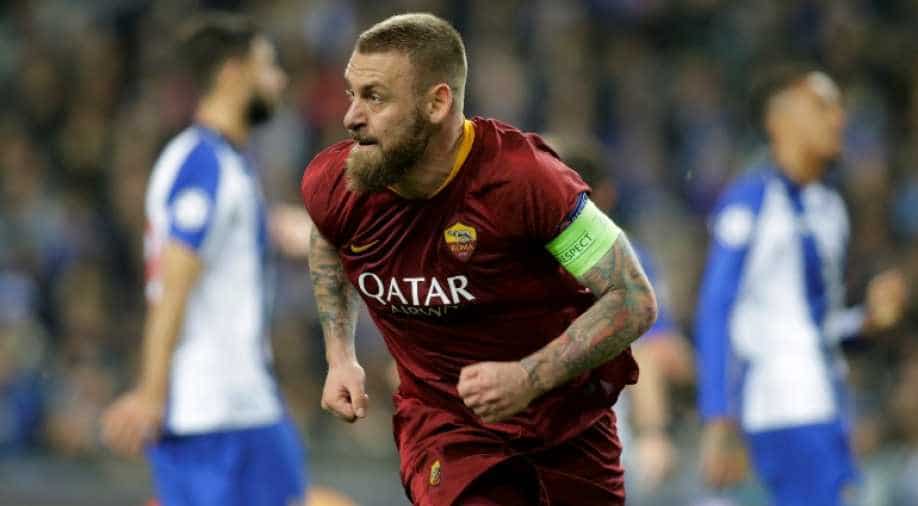 'I'd like to thank Daniele for his incredible dedication to this club and ensure him that our doors will remain open for him to return to the club in a new role whenever he wants', AS Roma president Pallotta said

AS Roma's combative midfielder Daniele De Rossi will end his playing career at the club after 18 years, during which he made 615 appearances and scored 63 goals in all competitions.

The club confirmed in a statement that Roma's final game of the season - at home to Parma - would be his last for the club he joined as a teenager in 2000.

Roma added that he would continue his playing career elsewhere.

"We will all shed tears when he pulls on the Giallorossi (yellow-and-red) shirt for the last time against Parma but we respect his desire to prolong his playing career - even if, at almost 36, it will be away from Rome," said club president James Pallotta.

"I'd like to thank Daniele for his incredible dedication to this club and ensure him that our doors will remain open for him to return to the club in a new role whenever he wants", Pallotta said.

He won two Coppa Italia titles with Roma in 2007 and 2008 although the nearest he came to a Serie A title was in 2010 when Roma led the table with four games to go but were overhauled by Jose Mourinho's Inter Milan.

De Rossi also played 117 games for Italy, making him their fourth most-capped player, and came on as a second-half substitute in the 2006 World Cup final where they beat France on penalties after a 1-1 draw.

De Rossi missed most of that tournament, however, as he was given a four-match suspension for elbowing an opponent in their opening game against the United States.

He was also sent off nine times playing for AS Roma although there is far more to De Rossi than aggression, as he is famous for his vision, passing ability and eye for goal.

A graduate of the club's academy and a Roma supporter during his childhood, he made his debut in the 2001-02 season.

"For 18 years, Daniele has been the beating heart of AS Roma's team," added Pallotta.

"From his debut in 2001 to taking on the responsibility of the captain's armband, he always represented the Roma fans on the pitch with pride as he established himself as one of the best midfielders in Europe", club president said.