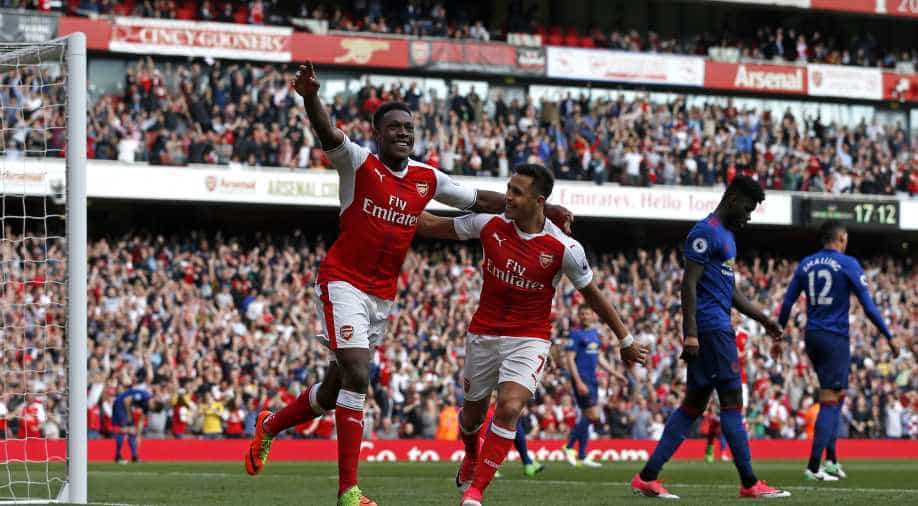 Arsenal are back in the hunt to qualify for the Champions League after Arsene Wenger finally got the better of Jose Mourinho in a 2-0 win over Manchester United, while Liverpool were held to a 0-0 draw by Southampton on Sunday.

Wenger had failed to win any of his previous 14 competitive clashes against Mourinho dating back to 2004, with his only victory over his old rival coming in the 2015 Community Shield when the Portuguese coach was in charge of Chelsea.

The Gunners boss brought an end to that frustrating streak at just the right time as goals from Granit Xhaka and Danny Welbeck improved Arsenal's chances of salvaging a troubled season by finishing in the top four.

Sixth-placed Arsenal are now six points behind fourth-placed Manchester City with four games to play, while Pep Guardiola's side have only three matches remaining.

Downplaying his rivalry with Mourinho, Wenger said: "It is not manager against manager.

"It was a patiently built win where in the first half you could see we were a bit nervous, but in the second half we took the edge off and scored the goals."

"Of course, we knew we were not coming in our maximum power. That's a decision," Mourinho said.

"We want to try to win the Europa League. It's more important than finishing fourth."

With Mourinho prioritising the Europa League semi-final second leg against Celta Vigo in midweek, United, who hold a 1-0 first-leg lead, fielded a much-changed side in north London.

United can qualify for the Champions League by winning the Europa League and they may well need to do exactly that after surrendering their 25-match unbeaten run in the Premier League.

The Gunners' only route back into Europe's elite club competition is via a top-four finish, so it wasn't surprising that they played with more hunger than United.

Even so, they still needed a stroke of luck to open the scoring in the 54th minute.

Xhaka blasted a long-range strike that slammed into the back of United midfielder Ander Herrera, looping high in the air before dropping into the net just out of the reach of goalkeeper David de Gea.

If that was a fortuitous way to take the lead, Arsenal had no need to apologise for their superb second goal three minutes later.

Alex Oxlade-Chamberlain whipped over a teasing cross and when United defender Chris Smalling misjudged the flight of the ball, former United forward Welbeck was perfectly placed to bury his header past De Gea for just his second league goal this season.

Infamously labelled "a voyeur" and "a specialist in failure" by Mourinho in the past, this was a sweet moment for Wenger, but it won't mean much unless Arsenal find a way to catch City.

At Anfield, Liverpool's James Milner saw his penalty saved by Fraser Forster as his side wasted a chance to bolster their Champions League bid.

It was Milner's first missed penalty since November 2009.

Liverpool's second-half penalty arrived when Jack Stephens elbowed away the ball inside the area.

It was well spotted by referee Bobby Madley and although Milner's spot-kick was right in the corner, Forster did well to get down and palm the effort away.

Liverpool are up to third, five points ahead of United, who have a game in hand.

Reds boss Jurgen Klopp had a curious excuse for Liverpool's woes as he blamed the poor quality of the Anfield pitch.

"Nobody wants to hear it but the pitch was really dry today," Klopp said.

"We gave all the water we had and after 15 minutes it was really dry - a lot of passes you could say why are they playing this?"