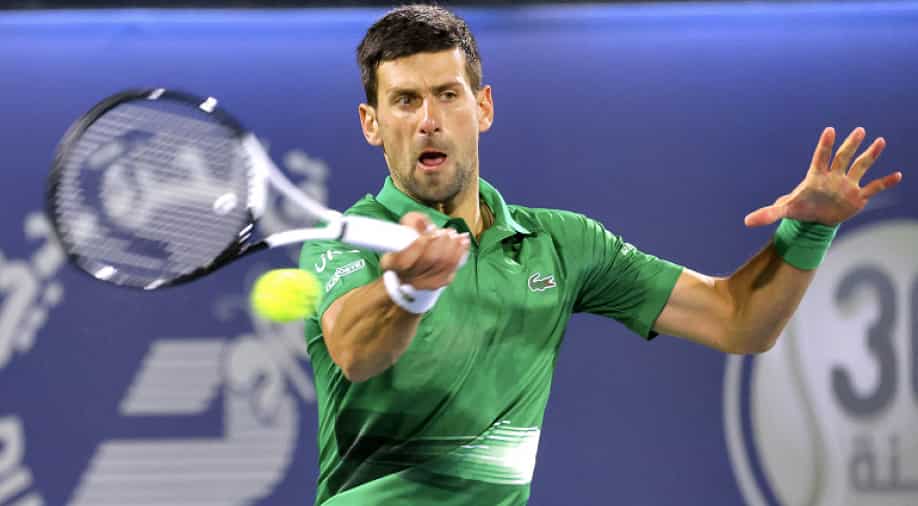 Novak Djokovic is currently in action at the ongoing Dubai Championships. Photograph:( AFP )

Andy Murray has refused to support Novak Djokovic on his anti-vaccine stand but wants to see the Serbian ace turn up in major events.

British tennis star Andy Murray has refused to support world no.1 tennis player Novak Djokovic's anti-vaccine stance but believes the world's best player should be taking part in all major events. Djokovic was barred from playing in the Australian Open 2022 earlier this year after refusing to get vaccinated against COVID-19.

Djokovic was held in detention before getting involved in an agonising legal battle only to get deported from Australia. He failed to defend his Australian Open crown as Rafael Nadal pipped him and the legendary Roger Federer to become the first player to reach a record 21 Grand Slams in his career.

After his controversial deportation from Australia, Djokovic has returned to the action for the first time in the ongoing  Dubai Championships. Murray, who is also playing in the tournament, told reporters he doesn't agree with Djokovic's decision to not get vaccinated but sympathises with the Serbian tennis ace over what happened with him in Australia.

“I’ve not seen him here (in Dubai). We exchanged a few messages while he was in Australia. I don’t agree with his decision. It would be a lot easier for him if he were to get vaccinated," Murray told reporters in Dubai.

“But I also didn’t like seeing him in the situation that he was in Australia as someone that I respect, have known since I was a child," he added.

Murray insisted that Djokovic's decision was bound to have consequences for him and the world no.1 will have to deal with them. However, he believes the Serbian, who is one of the greats of the game, should be allowed to take part in all major events as it is not great for tennis if Djokovic is not competing in big tournaments.

“There are consequences to the decisions he’s made just now. He obviously has to accept that. But I don’t think it’s great for tennis if our best player is not competing in the major events," said Murray.

“It would be better for tennis if he were playing all of the major events," he added.

In his first game since his return to the court after the infamous Australian Open saga, Djokovic defeated Italian teenager Lorenzo Musetti in straight sets at the Dubai Championships on Monday. Djokovic showed no signs of rustiness and earned a comfortable 6-3 6-3 win against the Italian.