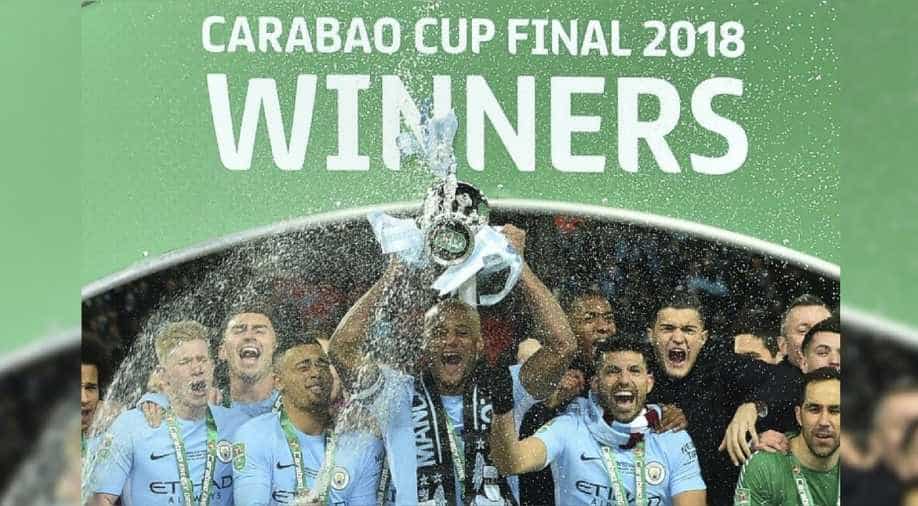 Manchester City rolled back the years on Sunday to win the first trophy of the Pep Guardiola era with three of their veteran players scoring in an emphatic 3-0 win against Arsenal at Wembley.

Sergio Aguero, Vincent Kompany and David Silva were all on the scoresheet as City lifted the trophy for the fifth time -- only Liverpool have won it more.

"It's important," said Guardiola. "We're so happy, and a big congratulations to all of Manchester City, and our fans. This trophy is for Manchester City and not for me.

"The first half we were not good, there were a lot of mistakes. In the second half we played with a lot more courage and personality -- we were outstanding."

City's first goal, in the first half, came in unlikely circumstances for a side lauded for their slick passing style.

A long punt upfield from goalkeeper Claudio Bravo was controlled by Sergio Aguero, who coolly lifted the ball over a helpless David Ospina in the Arsenal goal.

Captain Kompany doubled the lead in the second half with just over half an hour to go and Silva put the game out of the reach of Arsene Wenger's team.

The runaway Premier League leaders will be hoping to use the victory as a springboard to greater glory as the season approaches its final stretch but defeat for Wenger means he has never lifted the League Cup.

On a bitterly cold, clear day in London, City, in their light blue kit, took control early, playing measured football and enjoying the lion's share of possession against a side who have made Wembley a second home in recent years.

But Arsenal went closest to taking the lead within the first 10 minutes, with new signing Pierre-Emerick Aubameyang seeing his scuffed shot saved by a sprawling Bravo.

Seconds later Aguero found the side netting after an incisive break from City, who looked short of their fluent best.

But it was Aguero who broke the deadlock, controlling the ball as Arsenal's defence failed to deal with the danger.

The Argentine striker has scored in each of his past five games in all competitions against Arsenal and this was his 199th goal in City colours.

It was an unusual goal for Guardiola's team, who have been lauded for their silky passing game this season, which has already seen them hailed as one of the finest sides in Premier League history.

City made a bright start to the second half and captain Kompany was in the right place to steer home Ilkay Gundogan's shot from the edge of the box after a Kevin De Bruyne corner in the 58th minute.

It was no more than City deserved against a lacklustre Arsenal and the Belgian celebrated wildly in front of his own fans.

Just seven minutes later Arsenal was left with a mountain to climb when Silva smashed the ball past Ospina into the far corner of the net to make it 3-0.

Former Barcelona and Bayern Munich boss Guardiola kept faith with reserve goalkeeper Bravo for the Wembley showpiece ahead of first-choice Ederson. Bravo has played in every round of the competition so far.

Wenger also played his number two between the sticks, fielding Ospina ahead of Petr Cech.

A disappointed Wenger bemoaned his side's failure to take the lead through Aubameyang.

"I felt the game, we had the first good chance, a very easy one that we missed," he said.

"After that we made a big mistake for their first goal. But we controlled them pretty well in the first half, but they came out in the second half, and we were unlucky because the second goal was offside. But congratulations to Man City, they deserve the win."