2nd T20I between India and Australia called off due to rain 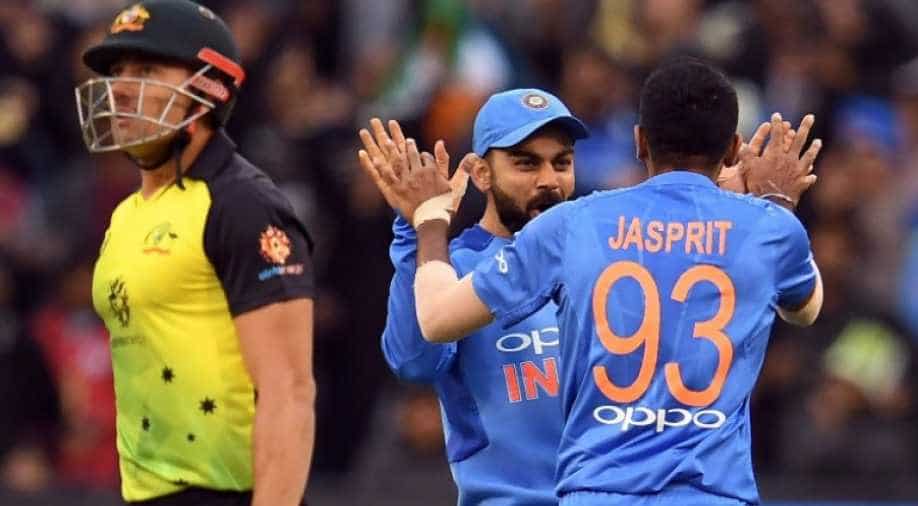 Rain interrupted the game in the 19th over when Australia was batting at 132 for the loss of seven wickets.

The 2nd T20I between India and Australia has been called off due to incessant rain at the Melbourne Cricket Ground on Friday.

Rain interrupted the game in the 19th over when Australia was batting at 132 for the loss of seven wickets. With just an over left, the target for the Virat Kohli-led side was adjusted to 137 runs in 19 overs, according to DLS method.

However, the rain didn't stop which further forced the umpires to readjust the target to 90 runs in 11 overs.

After waiting for over an hour, the game was finally called off, meaning there will be no result.

Earlier, the Indian bowlers learned from the mistakes they committed in the 1st T20I as the hosts were once tottering at 101/7 in 16 overs.

However, pacer K Khaleel Ahmed, who had clinched two wickets, was clobbered for 19 runs in the 18th over as Australia managed to reach a respectable total. He leaked a total of 39 runs from four overs.

Pacer Bhuvneshwar Kumar was the pick of the bowlers with figures of 2/20 from his three overs.

Put in to bat, Australia kept on receiving jolts at regular intervals after a poor start. Bhuvneshwar gave an early blow to the hosts by dismissing Aaron Finch on his very second ball.

Just when it looked Australia were recovering, Khaleel sent back Chris Lynn (13) making the scoreline read 27/2. With the addition of eight runs in Australia's scorecard, Khaleel struck again to dismiss opener D Arcy Short (14) in the sixth over.

Last match hero Glenn Maxwell and Marcus Stoinis failed to replicate their show and contributed 19 and four runs, respectively, as Australia were reeling at 62/5 in 11 overs.

With this game having no result, Australia still lead the three-match T20I series 1-0. India has one more game to level the series.