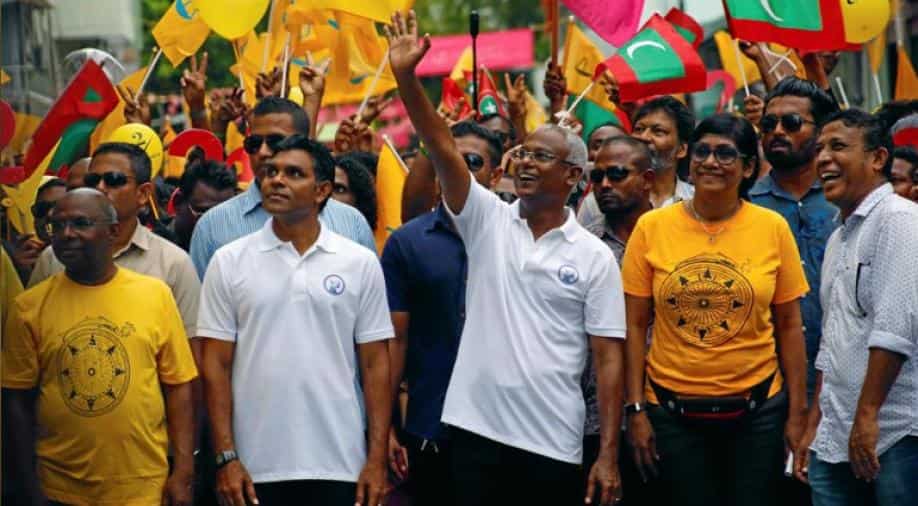 China's foreign ministry said today that president-elect Ibrahim Mohamed Solih will stay committed to enhancing ties with China and will "follow existing projects with the country".

"We also noted that at different stages some people do not want to see the smooth progress of our cooperation," foreign ministry spokesman Lu Kang said, referring to ex-Maldives president Muhammad Nasheed who has spoken out against Chinese projects in the country.

Commenting on  China's ambassador to the Maldives Zhang's meeting with Solih, Chinese foreign ministry spokesman Lu Kang told the media that the newly president-elect had assured the continuation of the projects.

Nasheed now lives in exile in Sri Lanka after being convicted in anti-terror law, a move which was overturned by the Supreme Court. He is the senior lead of  Maldives Democratic Party (MDP) to which the current winner of elections Solih belongs.  The former president has been a bitter critic of China often calling for Chinese projects in the Maldives to be scrapped.

"China is buying up our lands, buying up our key infrastructure and effectively buying up our sovereignty," he had said. When Solih won the election last month, Nasheed declared that the new government would review the projects due to be set up by China.

Earlier, he had accused China for pressuring the Yameen government to return Indian helicopters stationed in the country which he said were used for meant for emergency evacuation.

However, the foreign ministry said China is willing to work with new government to cement the traditional friendship, deepen mutual benefit cooperation and elevate bilateral ties to a higher level while asserting that China has already signed cooperation agreements will continue to "implement the existing cooperation projects and continue to explore cooperation in more areas such as infrastructure, livelihood and tourism."

"The aim is to contribute to Maldives economic and social development and deliver benefits to the people of Maldives, the Chinese foreign ministry spokesman added.