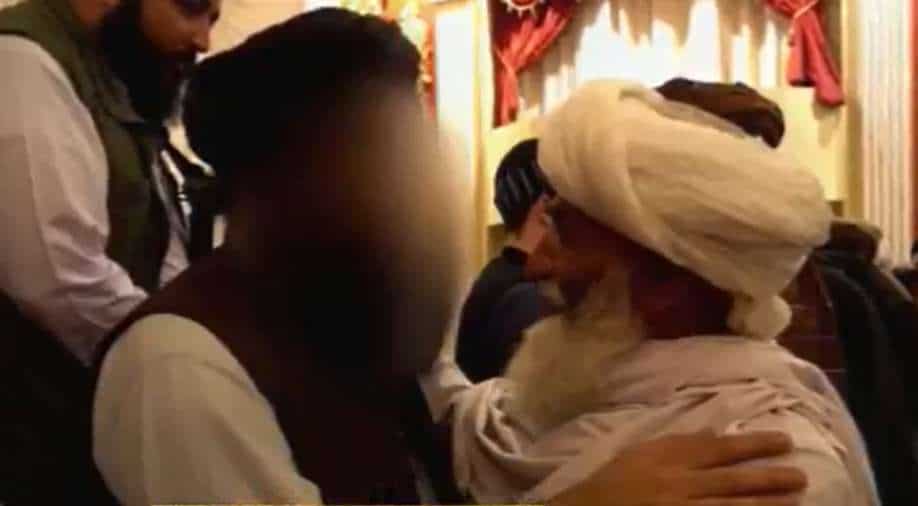 Siraj Haqqani is being seen either with his face concealed or obscured in public photographs Photograph:( WION )

According to sources, the violent comeback of ISIS Khorasan in Afghanistan is the possible reason why the Haqqani Network’s scion is desisting from making public appearances

Of late, Sirajuddin Haqqani, the interior minister of the Taliban's interim government in Afghanistan, is being seen either with his face concealed or digitally blurred in public photographs.

Haqqani, a top leader of the Haqqani Network that has strong links with the Pakistani military, distributed 10,000 Afghanis (about $110) and clothes to the families of suicide attackers and promised them a plot of land during a meeting held at Intercontinental Hotel in Kabul on Monday. Photos posted on Twitter by pro-Taliban accounts showed the event was attended by hundreds of men. Haqqani himself was featured in several of the photos. However, his face was blurred or he was photographed from the rear.

This reportedly is being done to hide the traces of information on his whereabouts and activities, which poses a question: what is Haqqani afraid of?

Does the man who is in charge of the internal security of Afghanistan, and a designated terrorist behind the dreaded Haqqani Network, is afraid of US special forces or intelligence agencies?

Is every move of his being watched by US security establishment?

However, the likelihood of any of these outcomes is admittedly slim.

The Interior Minister of the Taliban's interim government, Siraj Haqqani has been seen with face covered in public photographs. What is Haqqani afraid of? Is the US looking to capture or kill Haqqani?@SaroyaHem tells you more

According to sources, the violent comeback of Islamic State Khorasan (ISIS-K) in Afghanistan is the possible reason why the Haqqani Network’s chief is shunning from sharing pictures of his public appearances.

It is said that the rising targeted attacks and indiscriminate suicide bombings may cause a rift or establish factions among the Taliban, which might trigger exodus of its fighters to join the ISIS-K.

The militant group has been seeking to grow its influence in the restive region, posing a risk to the Taliban’s control.

The ISIS-K has upped the ante after the sudden withdrawal of US forces from Afghanistan. The terrorist group has been carrying out indiscriminate suicide attacks across Afghanistan, targeting minorities.

On October 15, a group of suicide bombers attacked a Shiite mosque in southern Afghanistan, triggering explosions that killed dozens of people during crowded Friday prayers.

According to the Associated Press, Hafiz Sayeed, the Taliban’s chief for Kandahar's department of culture and information, said 47 people had been killed and at least 70 wounded in the attack.

The attack appeared to bear the hallmarks of last week's suicide bombing at a Shiite mosque in northern Kunduz province that killed at least 45 people and wounded dozens more — timed for maximum casualties during Friday prayers that typically attract the largest number of worshippers.

The earlier attack was claimed by the Islamic State Khorasan, or ISIS-K, which views Shiite Muslims as apostates and opposes the Taliban regime.

While the Taliban have pledged to restore order in Afghanistan after decades of war, since they seized full control of the country in August, the ISIS affiliate has increased attacks in the country.