Truly sickening: 'Kabul skydiving club' t-shirts mock Afghans who fell to their deaths from US plane 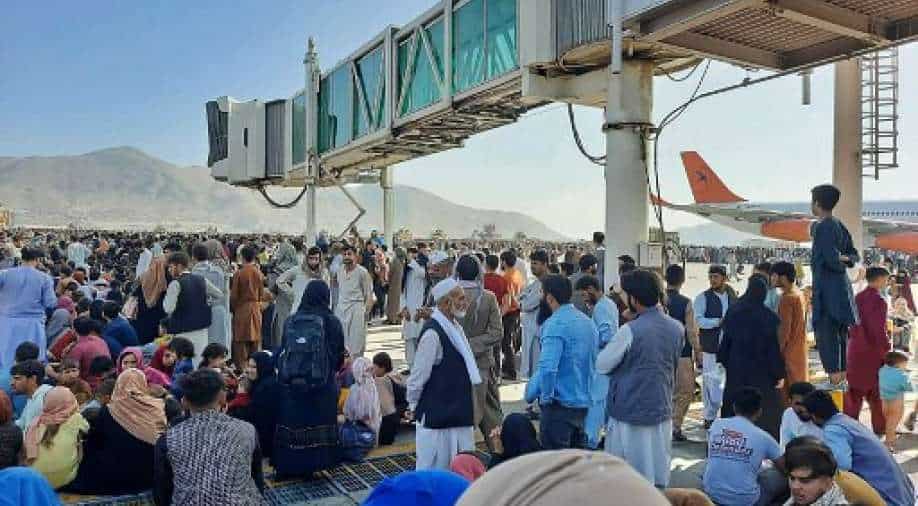 Thousands of people desperate to flee Afghanistan thronged Kabul's airport after the Taliban seized the capital, prompting the United States to pause evacuations, as President Joe Biden confronted mounting criticism over the US withdrawal

Netizens are slamming sickening new T-shirts being sold online that mock Afghans who plummeted to their deaths from departing US jets in Kabul.

Tens of thousands of people have tried to flee Afghanistan since the Taliban swept into the capital Kabul on Sunday, completing a stunning rout of government forces in a matter of days.

The tasteless T-shirts being sold online for £12 feature the slogan 'Kabul Skydiving Club, Est 2021' next to silhouettes of a C-17 plane and the falling stowaways.

The company behind the clothing says it aims to produce clothing which 'catch the latest trend.'

While several were hosted by niche e-commerce sites, one was being sold via a link on Etsy, which serves as a platform for independent sellers to run their own shops. The listing was taken down after people expressed their disapproval and anger.

Hey @Etsy why do you allow sellers to sell inhumane products like this making fun of people dying? How do I report this seller? pic.twitter.com/FBHa1yBeIm

@Etsy what are you doing about this? This is disgusting.

@Etsy is this acceptable merch?

Fully agree…disgusting way of making money…really despicable however, who in 2021 can ever think it’s a good idea to hang on a plane…seriously….humanity has a loooong way to go.

Thousands of people desperate to flee Afghanistan thronged Kabul's airport after the Taliban seized the capital, prompting the United States to pause evacuations, as President Joe Biden confronted mounting criticism over the US withdrawal.

Chaotic scenes at the airport included a group clinging to a US military transport plane as it taxied on the single runway. One person appeared to fall from the plane during takeoff, according to television footage.

US troops fired in the air to deter people trying to force their way onto a military flight evacuating US diplomats and embassy staff, a US official said.

At least five people were reported killed, although a witness said it was unclear if they had been shot or killed in a stampede.

The Taliban are edging towards establishing a government, with co-founder Abdul Ghani Baradar returning from exile and other senior figures meeting ex-president Hamid Karzai and other former government officials.

Memories of the Taliban's brutal regime of the 1990s, which saw music and television banned, people stoned to death, and women confined to their homes, have caused panic about what lies ahead for Afghans.

The Taliban's rapid conquest of Kabul followed Biden's decision to withdraw US forces after 20 years of war, the nation's longest, that he described as costing more than $1 trillion.