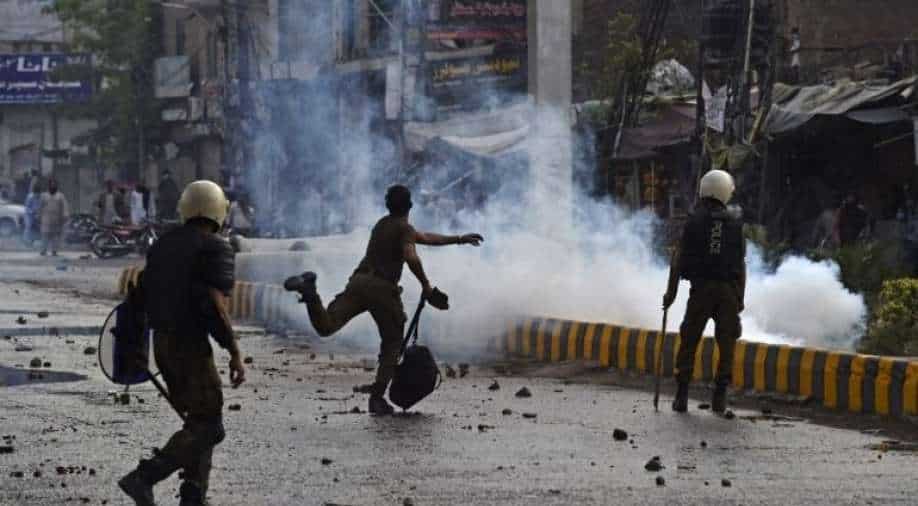 A file photo of a policeman throwing a stone towards supporters of Tehreek-e-Labbaik Pakistan (TLP) during a protest in Lahore, after the arrest of their leader, who has called for the expulsion of the French ambassador. Photograph:( AFP )

What do the protesters want? Four things. One, the release of their leader Saad Hussain Rizvi, the lift of the ban on their group, quashing of all cases against its members, release of the arrested protesters and expelling of the French ambassador to Pakistan, Marc Barety

A cartoon has destabilised Pakistan, a country of 220 million people. Islamist radicals have taken law and order hostage and the prime minister, who once asked his citizens to unite against France, is now having a tough time explaining why he can't send the French ambassador back.

The violent protests, which began almost a week back, is far from being over. On one hand, are the supporters of Tehreek-e-Labbaik Pakistan (TLP) and on the other, Pakistan's security forces. They are clashing endlessly.

There's violence in almost every major city, such as Islamabad, Lahore, Karachi, Rawalpindi, Multan, Peshawar, Gujranwala, Faisalabad, etc. Every city in Pakistan is grappling with unrest.

What do the protesters want? Four things: the release of their leader Saad Hussain Rizvi, the lift of the ban on their group, quashing of all cases against its members, release of the arrested protesters and expelling of the French ambassador to Pakistan, Marc Barety.

Have the demands been met? So far, Islamabad has only agreed to release some of those arrested for disrupting law and order. It says it won't lift the ban on TLP and won't release its leader.

For the fourth demand, Imran Khan says, expelling the French ambassador will not change a thing. Besides ruining Islamabad's already rocky ties with European nations and maybe triggering some sanctions. Imran Khan said, "My question is that, will sending the French ambassador back and cutting ties stop this? Is there a guarantee that no one will insult the Prophet afterwards? Is there a guarantee?"

When Charlie Hebdo republished Prophet Muhammad's caricatures, Imran Khan went all out to project himself as the custodian of Islamic faith. He put out sanctimonious tweets, preaching Emmanuel Macron on what the hallmarks of a true leader are. He also milked anti-France sentiments and gave a free run to protesters in his country. Rallies were held across Pakistan, calling for the death for Emmanuel Macron and the boycott of French products.

The Imran Khan govt led from the front and now when the chickens have come home to roost, the same prime minister is preaching tolerance, and to save face, the Pakistan govt has introduced a resolution on the expulsion of the French ambassador in Pakistan's national assembly. The debate has kickstarted, but not how the PTI wanted it to.

The opposition is going all guns blazing in exposing Imran Khan's hypocrisy. Ahsan Iqbal, opposition lawmaker, said, "The blasphemy was committed in France and we have to discuss this issue here in the Parliament. Mr Speaker, I was expecting that whenever there is a session over the honour and respect of Prophet Muhammad, it would be the most important session for any lawmaker or a Pakistani Muslim, (more) than any business. So, I expect that the prime minister should be on his chair during the session, and today's resolution should be presented by the prime minister himself."

Imran Khan also has some advice for Western nations. He has asked them to criminalise blasphemy against Islam. He says that insulting Prophet Muhammad should be treated the same way as the denial of holocaust. Says the leader of a country that uses faith to justify terrorism.

Why other Islamic countries are not protesting? The protests in Pakistan are as much religious as they are political. The TLP has a history of being backed by the Pakistan Army and the ISI. It was brought into the mainstream as a tool of political engineering and to launch Imran Khan to power. Now, this party has gone rogue and it has turned blasphemy into a political weapon and won the support of the general public. Imagine the implications to South Asia, if this party comes to power in the future.