Ties with Mulayam Singh unbreakable, will take him along: Akhilesh's olive branch to father ahead of polls 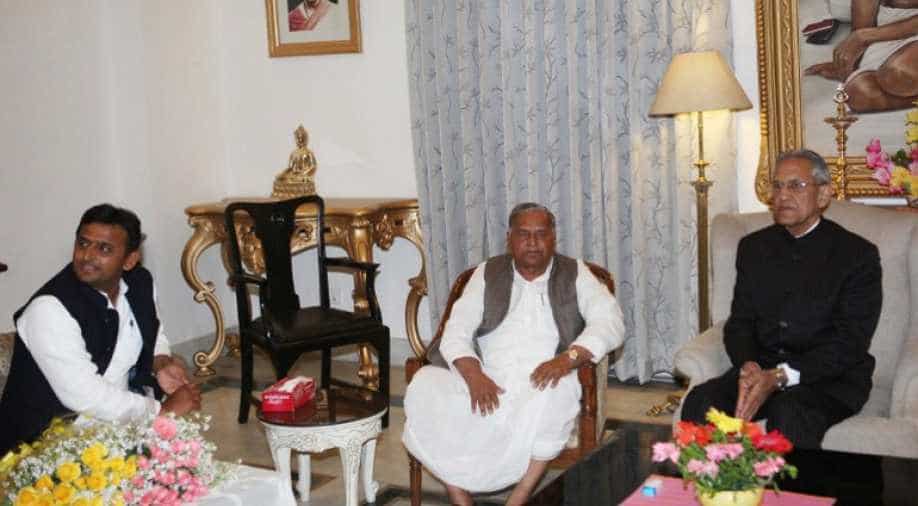 A day after India's Election Commission granted the disputed 'cycle' symbol of the Samajwadi Party (SP) to Akhilesh Yadav, the Uttar Pradesh chief minister visited his father and SP founder Mulayam Singh at his residence, describing his ties with him as "unbreakable."

Akhilesh, who was reportedly given a list of about 40 candidates by Mulayam Singh, said over 90 per cent of the candidates in both lists were common. He said his priority was to form the SP government in the upcoming assembly elections in the state and that he would take his father along.

"I will take Netaji (Mulayam Singh Yadav) along...My relation with him is unbreakable. I was confident that I will get cycle (symbol). Little time is left. It's a big responsibility and I will take everyone with us," he said.

"Over 90 per cent candidates in both the lists are common. We will finalise the list of candidates soon," Akhilesh told reporters during an informal chat at his Kalidas Marg residence in state capital Lucknow.

However, the Akhilesh faction led by his mentor and uncle Ramgopal Yadav filed a caveat in the top court asking it not to pass any order challenging the Election Commission order without hearing their side.

The Uttar Pradesh chief minister also went into a huddle with his advisors, including Upper House legislators Ramgopal Yadav and Naresh Agarwal, strategising on an alliance with Congress, RLD and JD(U) for the upcoming assembly elections in the state.

SP sources said the list of party candidates will be released in a day or two.

There were reports that the three parties could come out with a common minimum programme.

While Akhilesh said in Lucknow that a decision on the alliance will be made in a day or two, senior Congress leader Ghulam Nabi Azad confirmed his party would ally with the SP in the upcoming UP elections.

"The decision on alliance (with Congress) will be taken in a day or two," Akhilesh told journalists in Lucknow. His uncle and party strategist Ramgopal Yadav hoped a grand secular alliance would be in place for polls.

"I am confident that the Samajwadi Party-Congress alliance will form the next government in Uttar Pradesh," All India Congress Committee (AICC) general secretary Ghulam Nabi Azad told the press in New Delhi.

Party coordinator for UP Meem Afzal said, "Congress will have an alliance with Samajwadi Party in Uttar Pradesh. The details of the arrangement will be announced in the next two days."

The Congress is yet to officially announce the SP alliance and seat-sharing agreement although an announcement is expected soon. Congress leader Sheila Dikshit, had earlier said that she would withdraw as the Congress' chief ministerial candidate if her party enters into an alliance with the Samajwadi Party in the state.

The poll process kicked off today with a notification being issued for the first phase of polling on February 11.

Before the poll panel settled the dispute between the warring factions in Akhilesh's favour, Mulayam had rejected all suggestions of a tie-up with the Congress despite Akhilesh saying that an alliance between the two could fetch 300 of the state's 403 seats.

According to SP sources, the party will keep the majority of over 250 seats with itself. Congress was being offered around 90-100 seats by the SP, which was also said to be trying to rope in Ajit Singh's RLD. Rashtriya Lok Dal has pockets of influence in western UP which goes to polls in the first two phases on February 11 and 15.

Ramgopal Yadav and Ghulam Nabi Azad are reportedly in talks to iron out differences over seat sharing between the two parties.

Party sources said the list would be prepared keeping in mind the possible alliance with Congress as nomination for first phase has already begun.

Mulayam Singh, meanwhile, stayed put at his bungalow, hardly a stone's throw away from that of Akhilesh. Shivpal Yadav and a few other loyalists like Ambika Chowdhury met him during the day.