Thousands of Rohingya protest against conditions on Bangladesh island 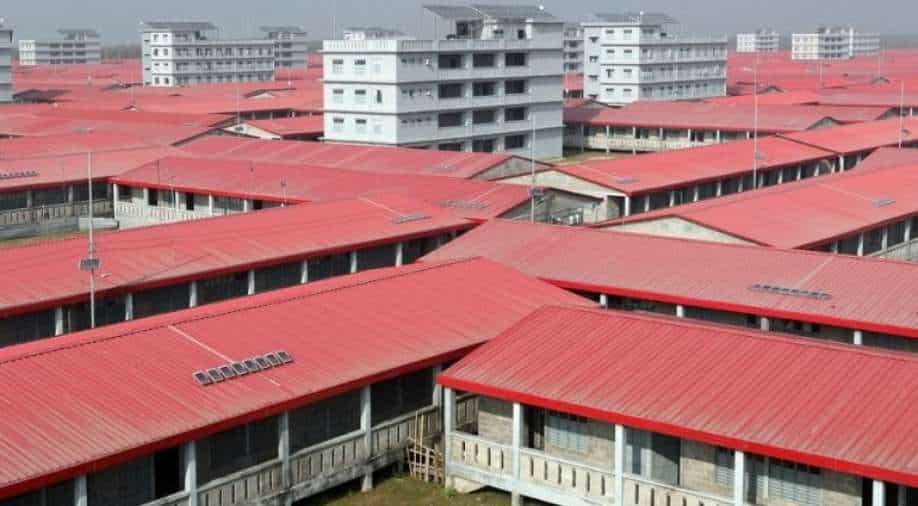 In this photograph taken in January 31, 2021 a general view shows a housing complex, where Rohingya refugees are being relocated, in Bhashan Char island of Noakhali District Photograph:( AFP )

Since December, Bangladesh has shifted 18,000 out of a planned 100,000 refugees to the low-lying silt island of Bhashan Char from the Cox's Bazar region, where around 850,000 people live in squalid and cramped conditions

Several thousand Rohingya staged "unruly" protests Monday against living conditions on a cyclone-prone island off Bangladesh where they were moved from vast camps on the mainland, police said.

Since December, Bangladesh has shifted 18,000 out of a planned 100,000 refugees to the low-lying silt island of Bhashan Char from the Cox's Bazar region, where around 850,000 people live in squalid and cramped conditions.

Most of them had fled a brutal military offensive in neighbouring Myanmar in 2017 that UN investigators concluded was executed with "genocidal intent".

Monday's protest involved up to 4,000 people, police said, and coincided with an inspection visit by officials from the United Nations refugee agency (UNHCR).

"The Rohingya who are there became unruly the moment the UNHCR representatives landed (on the island) by helicopter today," local police chief Alamgir Hossain told AFP.

"They broke the glass on warehouses by throwing rocks. They came at the police... Their demand is they don't want to live here."

One Rohingya man confirmed to AFP that bricks were thrown and that police prevented them from entering a building where the UNHCR officials were present.

A police spokesman said Rohingya protesters attacked officers, injuring several of them. They also damaged cars on the island, he said.

"The UNHCR delegation was able to meet with a large group of refugees and to listen to the various issues that they raised, which the delegation will further discuss with the Bangladesh authorities," she said.

She said the delegation has now arrived in Cox's Bazar and would visit the Rohingya refugee camps Tuesday, before returning to Dhaka to meet with senior government officials.

'Dire straits'
After the first transfer on December 4 to the island in the Bay of Bengal, several Rohingya told AFP they were beaten and intimidated into agreeing to be relocated.

Their claims have been echoed by rights groups.

The Bangladesh government insists relocation is voluntary, that the island is safe and that its facilities are far better than those in the camps. Police told AFP at least 49 Rohingya, including women and children, have been arrested in recent weeks after fleeing the island and trying to return to Cox's Bazar.

But Rohingya leaders say that scores, if not hundreds, of people from their community have escaped and have since returned to Cox's Bazar.

One man told AFP on condition of anonymity that he left the island by swimming and then boarding a Bangladeshi fishing boat waiting for him, paying the owner $300.

He said that before agreeing to move to the island, he had been assured that he would be able to return to his family in Cox's Bazar after two weeks.

"The Rohingyas in Bhashan Char are given only food and no other facilities," he said.

He said promises that they would be able to work on the island, farm and fish were not fulfilled.

"The Rohingyas are in dire straits there. The Cox's Bazar (camps) are a thousand times better than Bhashan Char," he said.

The UN said it has not been involved in the relocation process. There was no immediate comment from the UNHCR on Monday's demonstrations.