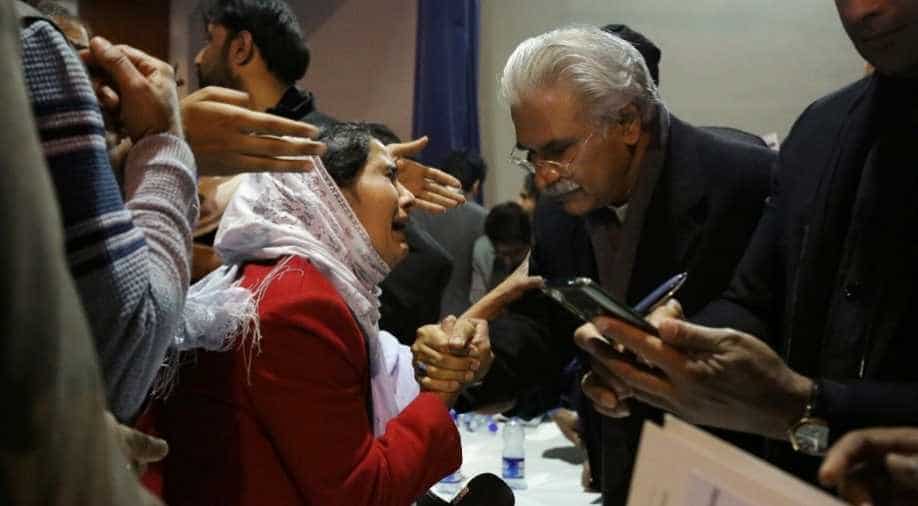 Health Minister, Zafar Mirza (R), interacts with the mother of a Pakistani student during a meeting in Islamabad, Pakistan. Photograph:( Reuters )

More than 1,000 Pakistan students continue to remain stranded in Wuhan city as coronavirus killed over 2,000 people in China and infected over 74,000.

Over 400 parents travelled from around the country to attend a meeting at a school in Islamabad and around 100 protested with placards outside after the meeting, blocking a nearby road. Protests in the larger cities of Lahore and Karachi were held last week.

Slogans like 'shame on the government', 'bring our kids back', were raised during the meeting Pakistan's foreign minister Shah Mahmood Qureshi failed to attend after promising that he would.

In the meeting, parents confronted the country's health minister and government advisor briefed parents for the first time.

Health Minister Zafar Mirza and Minister for Overseas Citizens Zulfiqar Bukhari told the parents that the students' welfare was better off in China and Pakistan did not have adequate facilities to quarantine them if they returned.

But hundreds interrupted the briefing, with some seizing microphones to say they did not want to listen to officials until their children were returned and dozens flooding the stage to crowd around the ministers.

Health minister Mirza said he would convey the parents’ anger at a cabinet meeting on Thursday.

Pakistan has said its embassy in Beijing is supporting students and a two-person team travelled to Wuhan this week to meet students and gather more information about their situation.