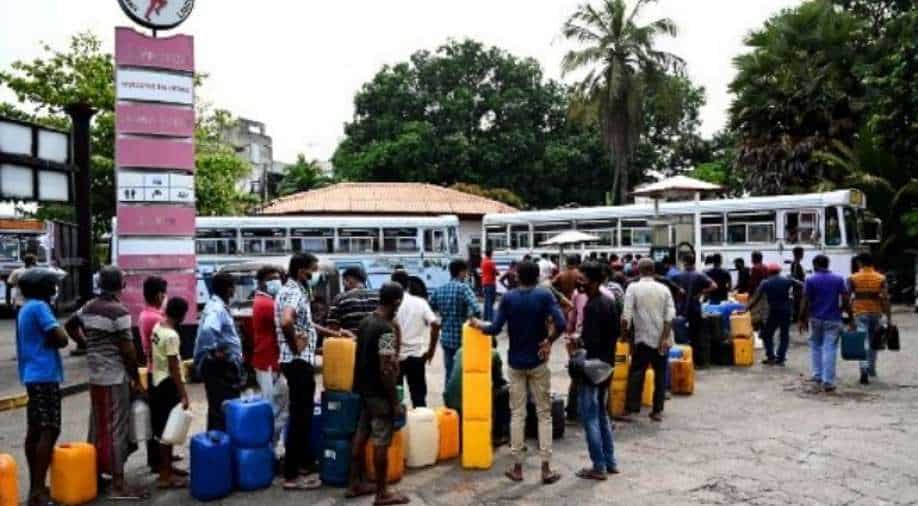 People stand in a queue to buy diesel fuel at a petrol station in Colombo on March 3, 2022. Photograph:( AFP )

Sri Lanka's central bank hiked interest rates by one percentage point on Friday and urged the government to increase taxes as the country skirts economic collapse.

The troubled South Asian island nation is in the grip of a severe foreign exchange crisis that has led to acute shortages of food, fuel, medicines and industrial raw materials, sending inflation soaring.

Public transport has been crippled since Wednesday with no diesel for buses and large parts of the country of 21 million people hit by lengthy power cuts.

On Thursday, President Gotabaya Rajapaksa sacked the energy and industry ministers after they both criticised the government's efforts to deal with the crisis.

Another senior minister Vasudeva Nanayakkara expressed solidarity Friday with the sacked ministers and said he would not attend cabinet meetings.

The Central Bank of Sri Lanka hiked the benchmark deposit and lending rates by 100 basis points each to 6.5 per cent and 7.5 per cent respectively.

The move follows a January decision to lift borrowing costs by 50 basis points.

The increases "will dampen the possible build-up of underlying demand pressures on the economy, which would, in turn, help ease pressures in the external sector", the bank said in a statement.

It also urged the government to increase fuel prices and electricity tariffs immediately as well as raise taxes to shore up government revenue. That came after a similar call by the International Monetary Fund.

A broad import ban has been in place since March 2020 to shore up foreign reserves after the pandemic knocked out the lucrative tourism sector which previously earned about $4.5 billion annually.

In a statement following its annual review of Sri Lanka's economy, the IMF on Thursday warned the country that its foreign debt was "unsustainable" and called for urgent action.

Official data shows Sri Lanka needs nearly $7 billion to service its foreign debt this year, but the country's external reserves at the end of January were only $2.07 billion -- just enough to finance one month's imports.