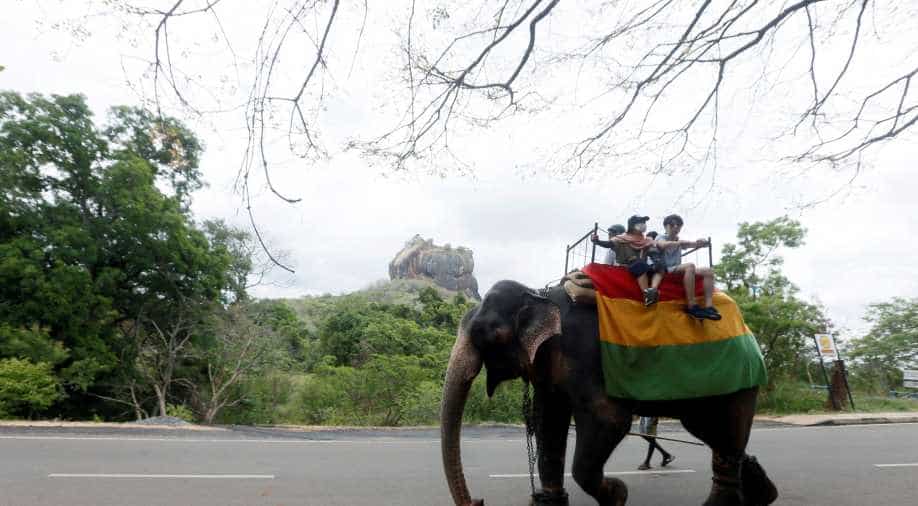 A group of tourists travel by elephant along a main road, as the Sigiriya rock fortress is seen in the background in Dambulla, Sri Lanka. Photograph:( Reuters )

Whether Ranil Wickremesinghe stays in office or former president Mahinda Rajapakse takes his place, foreign earnings will be badly needed.

A political crisis in Sri Lanka, where two prime ministers are fighting for power, is scaring away tourists and raising questions over foreign aid, ringing alarm bells for the economy as the currency slumps to record lows.

The turmoil in the Indian Ocean nation that has seen one premier refuse to be sacked, and another battle to prove a majority in a parliament that is banned from meeting, has caused major upheaval that Sri Lanka cannot afford.

Amidst warnings from politicians of a "bloodbath" if the dispute escalates, tourists are cancelling hotel bookings just as Sri Lankan beaches and major sites like the Temple of the Tooth prepare for peak season.

While no official figures have been given, deluxe hotels have reported cancellations and a critical decline in new bookings in the past 10 days.

"This comes at the worst possible time when people in Europe are making their holiday plans abroad," a Colombo city hotel executive told AFP. "We have had a lot of cancellations from the United States."

"With the political crisis our winter season is gone," the director of a luxury beach resort in the south of the island said.

Western nations have warned their citizens to be on their guard in Sri Lanka.

"You should exercise vigilance and avoid all demonstrations or large political gatherings," a British government advisory said.

Tourism is a cornerstone of the economy. More than 2.4 million foreign holidaymakers visited last year, spending $3.2 billion. Authorities had been counting on a rise of more than 10 per cent this year.

And whether Ranil Wickremesinghe stays in office or former president Mahinda Rajapakse takes his place, foreign earnings will be badly needed.

The Asian Development Bank had predicted the economy would grow by 3.8 per cent this year and 4.5 per cent in 2019, but all bets are now off.

The power vacuum has raised doubts over a US $1.5 billion Japanese-funded light rail project and another US $480 million of US finance for transport and health, a Wickremesinghe minister, Patali Ranawaka, said last week.

The International Monetary Fund (IMF) was about to announce an agreement on releasing a new tranche of a US $1.5 billion loan when President Maithripala Sirisena sacked Wickremesinghe on October 26.

"We are monitoring the situation closely and we remain in contact with our counterparts at the technical level," an IMF spokesman said of the deepening power struggle.

Wickremesinghe, a market liberal, has insisted he is still in charge while strongman former leader Rajapakse -- already blamed for piling up the island's debt when he was president from 2005 to 2015 -- launched his rival administration last week with measures that caused new jitters.

Rajapakse, finance minister as well as head of government, reduced the price of fuel and other essential goods and cut taxes in a move to win over the public.

Treasury officials, who asked not to be named, said the revenue loss from the cuts could blow a new hole in the country's balance sheet.

Official figures show that Sri Lanka will have to start repaying a record US $4.2 billion of debt in 2019, up from US $2.8 billion this year.

The crisis broke just days after Finance Minister Mangala Samaraweera called for a "coalition of the willing" to stabilise the free-falling Sri Lankan rupee along with other emerging market currencies.

The rupee hit a record-low 177.32 to the dollar last week, despite official measures to arrest its decline.

The currency has shed more than 14 per cent this year and Sri Lanka fears it could slide further as US sanctions squeeze Iran, the island's chief source of oil.

Samaraweera, whose position is now disputed by Rajapakse, said the flight of foreign capital accelerated in the first four days after the political crisis.

He cited Colombo stock exchange figures showing foreign investors took out nearly US $23 million from the market, compared to $35 million over the first nine months of this year.

Rajapakse has said he will cut down on non-essential imports and reduce personal and corporate taxes to encourage local industrialists and companies.

Fitch said however that a protracted political crisis could undermine foreign investor confidence and "make it more challenging" for Colombo to pay its debts.