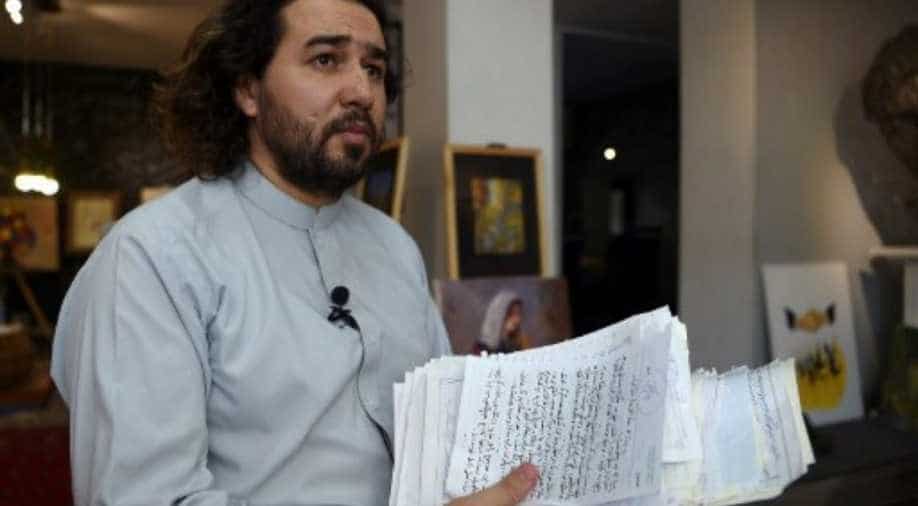 The letters are the fruit of a recent initiative by ArtLords, a not-for-profit group that Sharifi co-founded and runs, which aims to give a voice to young Afghans who feel ignored and powerless as the war rages on

Omaid Sharifi, who heads a Kabul-based art collective, sits in his studio and leafs through a stack of dozens of hand-written letters, reading out sentences at random.

A line in one missive, written in Dari and spelt out in huge letters, states simply, "We want peace," Sharifi says.

"By peace, they just mean a ceasefire, just stop this nonsense violence," he explains.

The letters are the fruit of a recent initiative by ArtLords, a not-for-profit group that Sharifi co-founded and runs, which aims to give a voice to young Afghans who feel ignored and powerless as the war rages on.

In a pilot project in Kabul, where more than 30 people were killed by blasts in the past week, ArtLords is building on the Afghan tradition of penning "dard-e-dil" -- letters of pain.

The scheme allows people living in an ultra-conservative society to find freedom by sharing their passions and emotions in written form.

Sharifi and his team have placed six large wooden letter boxes -- painted white and decorated with love hearts -- in high schools, universities and cafes around the Afghan capital and invited people to share their stories.

"Whenever you want to share your deep thoughts, you write letters," Sharifi says.

Within the first two weeks of the project, they had more than 300 letters, Sharifi says.

He reads from another, this one addressed to the Kabul government.

"'We need your attention because every single day we are dying from the fear of explosions and the fear that I might die today -- in the car, in the office, in the university...' He says nowhere is safe."

Watch: 'US Troops Would Remain in Afghanistan' says Donald Trump

The project launched a few weeks ago, just as talks between the US and the Taliban seemed to be entering their final stages.

They are working on a deal that would see the Pentagon pull about 5,000 troops from Afghanistan by early next year, in return for various security guarantees from the insurgents.

But so far, the negotiations have all but excluded the Afghan government, and many Afghans -- particularly educated young people in urban cores -- feel angry and ignored.

The US says it is up to the Kabul government and Afghan society at large to forge an eventual peace deal with the Taliban that protects basic freedoms.

But many fear a jaded America is selling out their interests in its bid to quit Afghanistan after 18 years of grinding and costly war.

The young letter writers want "an inclusive peace process that takes into consideration all realities of Afghanistan," Sharif told AFP at ArtLords' colourful base in Kabul, where artworks cover the walls and where anyone can walk in and paint a picture.

The 32-year-old artist is well known around Kabul and across Afghanistan thanks to ArtLords' prolific output, which centres mainly on the painting of huge murals on the capital's labyrinth of blast walls that divide the city into militarised ghettos.

The latest mural project ArtLords has undertaken is to paint one red tulip for each and every Afghan civilian killed in the war -- some 35,000 in all since 2001.

Each "one of these tulips is a story of someone," Sharifi said. Many of the flowers will be painted at the scene of the explosion or attack that claimed an innocent life.

Sharifi hopes to expand the letter-writing campaign across Afghanistan. He said the contents of all the letters would be shared with President Ashraf Ghani, Chief Executive Abdullah Abdullah, the US and even the Taliban.

"I know that the president has read all of the letters ... and he is aware of what the young ones are expecting of him in that whole peace process," Sharifi said