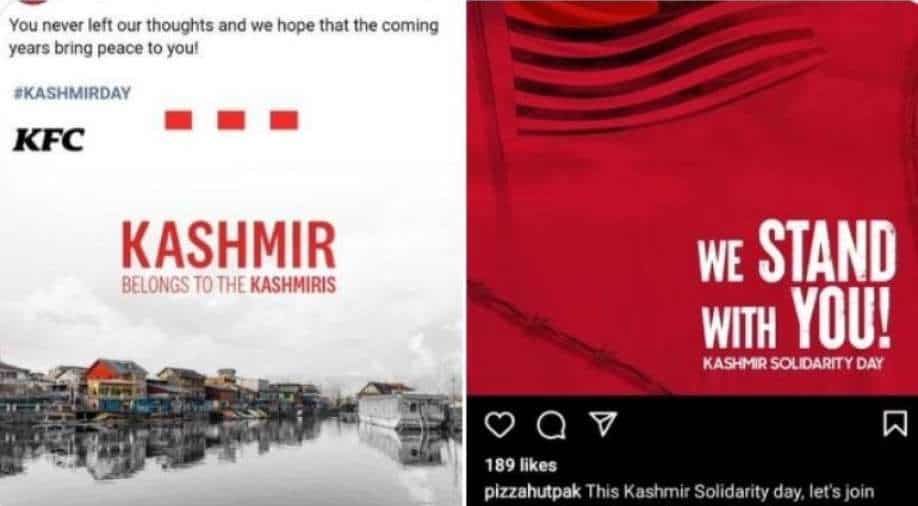 KFC & Pizza Hut faced backlash in India after their posts on Kashmir Photograph:( Others )

Hyundai India was quick to get into damage control. In a post it said: It is clearly against Hyundai Motor's policy that the independently-owned distributor in Pakistan made unauthorised Kashmir-related social media posts from their own accounts. Kia Motors in Pakistan had also posted a message on Kashmir.

After KFC created a social media storm over its Kashmir tweet, fast food giant Pizza Hut also got into the act and posted a message on Instagram which said: "We stand with you" on Kashmir solidarity day. 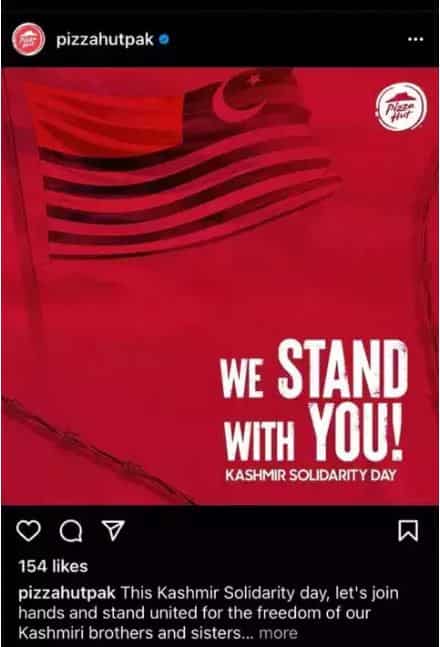 The purported post by Pizza Hut has since been deleted. KFC had also deleted its tweet on Kashmir. In a similar move, Hyundai and Kia had also posted tweets on Kashmir.

Watch: Is Pakistan pushing corporates to peddle its anti-India agenda?

Although the Pizza Hut post was from a verified account, however, it is unclear if it is directly handled by the US multinational company. Pizza Hut's move received huge backlash in India.

This is absolutely bizarre and unlikely of big corporations. Has the government or state sponsored terror group put pressure on them? Global corporations should learn from this incident and condemn #Pakistan for this state orchestrated campaign.
KFC Hyundai & Pizza Hut 👎 https://t.co/NuQbkbFyXt

KFC in a controversial tweet on February 5 loudly proclaimed: "Kashmir Belongs to the Kashmiris". "You never left our thoughts and we hope that the coming years bring peace to you!, it said. The company later moved to delete the post as KFC India apologised without naming Pakistan.

"We deeply apologise for a post that was published on some KFC social media channels outside the country. We honour and respect India, and remain steadfast in our commitment to serving all Indians with pride," KFC said in a tweet.

Hyundai India was also quick to get into damage control. In a post, it said: "It is clearly against Hyundai Motor's policy that the independently-owned distributor in Pakistan made unauthorised Kashmir-related social media posts from their own accounts."

The company said it made the distributer aware about the "inappropriateness of the action" and took steps to remove the social media post.

"Our subsidiary, Hyundai Motor India is not associated with the distributor in Pakistan," it claimed.

However, the damage was already done as it faced backlash from Indians on social media.

Cars Sold by Hyundai Motors in 2021

Yet @Hyundai_Global chose to needle India via its Pakistani Handle. Either they are very stupid and lack business sense or they have hired a very incompetent PR team which led to #BoycottHyundai disaster pic.twitter.com/jProIRNqYi

I booked #Hyundai Verna a month ago & it was due to be deliver this month but after seeing #HyundaiPakistan post, supporting separatism in #Kashmir,India, cancelled the Verna & called the Honda outlet and taken the delivery of Honda City today itself.

Convinced a friend to Buy Mahindra Thar instead of Hyundai Elantra.