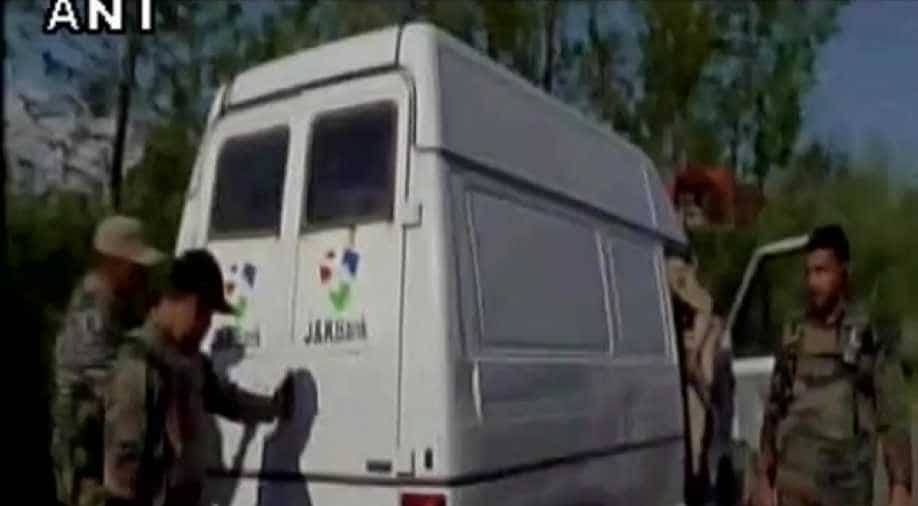 The van was returning to a bank in the village of Pumbai in Kulgam district, around 70 kilometres south of the main city of Srinagar. Photograph:( ANI )

The Hizbul Mujahideen militant outfit has claimed responsibility for the attack.

"All the seven in the van, five policemen and two bank employees, were killed," director general of police S. P. Vaid told AFP.

The van was returning to a bank in the village of Pumbai in Kulgam district, around 70 kilometres (43 miles) south of the main city of Srinagar, when it came under fire, Vaid said.

Another police officer told AFP on condition of anonymity that the attackers made off with cash and weapons.

Suspected militants in recent months have targeted banks across the restive Kashmir valley, where several armed groups have been fighting against Indian rule for decades.

Last week police said they foiled a bank raid in the southern district of Anantnag by two men who opened fire on paramilitary guards.

One of the attackers was arrested while another managed to escape.

Anti-India sentiment runs deep in Kashmir, where most people favour independence or a merger with mainly Muslim Pakistan.

Kashmir has been divided between India and Pakistan since the end of British rule in 1947 but both claim the territory in its entirety.