Prachanda and Madhesi: India is troubled by the political crisis in Nepal 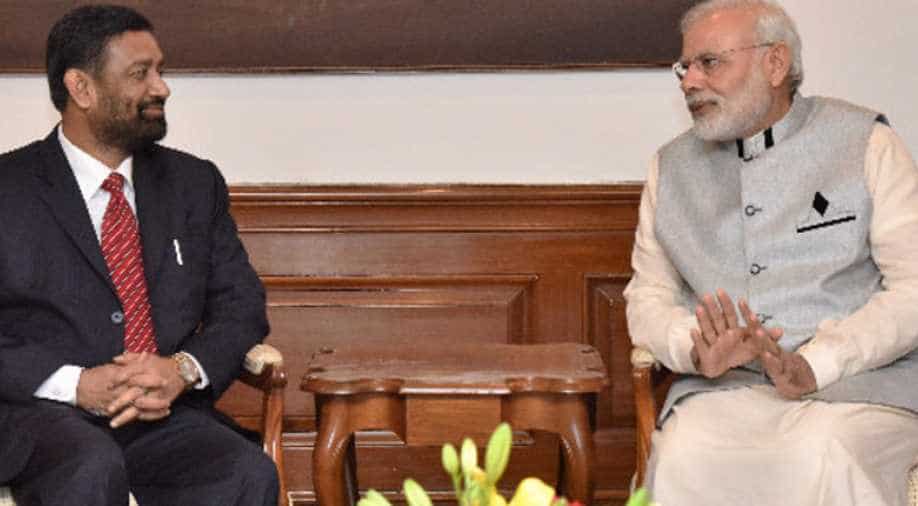 A Madhesi by birth and Minister of Home Affairs, Bimalendra Nidhi resigned over registration of impeachment motion against Chief Justice Sushila Karki Photograph:( Others )

In less than three months after becoming prime minister in May 2014, Narendra Modi had visited Nepal and addressed its Constituent Assembly. Nepal was then in the process of finalising its Constitution in the backdrop of the Madhesi demand to have a greater say and representation in the policymaking process. Modi offered some advice to members of the Constituent Assembly, saying that a consensual and not majority-driven approach was needed to shape the Constitution; that the Constitution integrated the nation’s past, present and history. The prime minister hastened to underline that India did not wish to interfere in the affairs of its neighbour but merely to support it.

Neither did Modi forget to applaud the nation for preferring the ballot over the bullet. In this case, the prime minister was, of course, referring to the Pushpa Kamal Dahal ‘Prachanda’-led communist party’s discontinuation of the 10-year long People’s War and its decision to join the national mainstream politics.

That now seems so long ago. Nepal is still struggling to frame a Constitution acceptable to the Madhesi groups. Prachanda is now the prime minister of Nepal. When Modi made his speech, Prachanda was on the Opposition and had vigorously applauded the Indian prime minister's exhortations. He was then on the Madhesi side, having aligned with them after giving up the armed struggle. Prachanda understood and appreciated their concerns and seemed to know the solution almost as well as the agitated Madhesis did. And yet, today, he too like his immediate predecessors, finds himself in the dock for not having done the needful.

Both Prachanda and the UDMF have blamed each other for being unreasonable and rigid.

The prominent Madhesi political outfits, now accumulated under the banner of the United Madhesi Democratic Front (UDMF), have withdrawn support from the Prachanda regime. They have threatened to disrupt the local body elections that are being held after a gap of two decades. Further, UDMF has pledged to intensify their agitation in support of their demand for changes in the Constitution, thus, squarely pitting themselves against their one-time ally.

A desperate attempt was made to cool tempers with the registration of a joint amendment proposal to the Constitution, presented by Prachanda’s CPN (Maoist Centre), the Nepali Congress, the Madhesi Front and the Rastriya Prajatantra Party, but that has not gone beyond the initial stage. Both Prachanda and the UDMF have blamed each other for being unreasonable and rigid.

India is caught in a bind. It has traditionally backed the Madhesis, to the extent that it has been accused by assorted politicians in Nepal of not just inciting the Madhesis but also interfering in that country’s internal affairs. Last year’s memory of the blockade is still fresh in the minds of people on both sides of the open border. Kathmandu, which then had a government led by KPS OIi, had openly accused New Delhi of inflaming passions and backing the blockade put up by agitating Madhesi mobs.

A bunch of Nepalese politicians, probably to deflect attention from their failure to effectively address the grievances of the Madhesi community, sought to build a strong anti-India sentiment. They did succeed to the extent of undoing the goodwill that Modi’s visits had created. But that failed to settle their internal problem. New Delhi is apprehensive of yet another bout of violent protests by the Madhesi groups but is also acutely aware of Prachanda’s failure so far to tackle the matter to the satisfaction of all. It would have preferred to keep away but it cannot because unrest in Nepal has ramifications for India.

Prime Minister Prachanda has added to the dilemma by calling up Modi and seeking his help in the conduct of the local body polls. The Indian prime minister has assured of support. It’s unclear what form that support is supposed to take, but it cannot be in the shape of any direct intervention. The UDMF is understandably upset at New Delhi’s readiness to extend cooperation because it had expected India to use its leverage to persuade the Prachanda regime to accept at least a few of their key demands straightaway. Given this background, the Madhesis are unlikely to now heed any word of advice from India.

New Delhi has issues other than the Madhesi problem to contend with, vis-a-vis Nepal. It does not want to alienate Kathmandu at a time when China is making big pushes into that country, luring Kathmandu with road and rail projects. During the blockade period of nearly four months, Nepal had turned to Beijing for the supply of essential goods, and China had readily obliged. Though the extent of material help Beijing can give to Nepal, and in time, is severely limited by geographical constraints, the fact that Kathmandu is drawing closer to the China orbit, is not something that New Delhi can be comfortable with.

The problem, though, is: Regardless of the support India extends to the Prachanda government — and to that which may come in its place — it will neither be able to cut itself off from the Madhesi issue nor be able to pre-empt the feeling that when it comes to the crunch, New Delhi will stand by the Madhesis. The historical and cultural baggage is far too big to be ignored. Besides, a strong section of the Indian political class, despite having a soft corner for the Prachanda-led communists, is deeply aligned with the Madhesi cause and is likely to pressure the government to walk the middle path.

Over the decades, various Nepalese politicians and even the intelligentsia there have accused India’s R&AW of fomenting trouble in the Himalayan kingdom.

Allegations of Indian interference have been levelled before — even during the times of monarchy — and they will be made time and again. The monarchy, it may be recalled, had rebuffed the Indian representative Karan Singh when he had gone to Nepal with a message from the Indian leadership to see reason and step aside in 2006. King Gyanendra did quit, ending a 14-month long direct reign, but not before snubbing Karan Singh and accusing India of forcing his hand.

Organisations in Nepal, fighting for an end to the monarchy, should have been grateful for the Indian intervention. Many were, but there was dismay among the Nepali Congress and the Communist Party of Nepal (Unified Marxist Leninist), who believed that New Delhi had supported Prachanda’s outfit at the cost of their own. Over the decades, various Nepalese politicians and even the intelligentsia there have accused India’s R&AW of fomenting trouble in the Himalayan kingdom.

The present argument is that the Madhesi grouping should allow local body elections to be held in a peaceful and fair manner and then use the goodwill so generated to coax the Prachanda government into acceding to its demands. Disruptions at this stage would only worsen the situation and delay a resolution. Prachanda has already promised a solution following the by-polls. But the Madhesis seem to have lost all faith in the Nepalese prime minister. These are anxious moments for India.