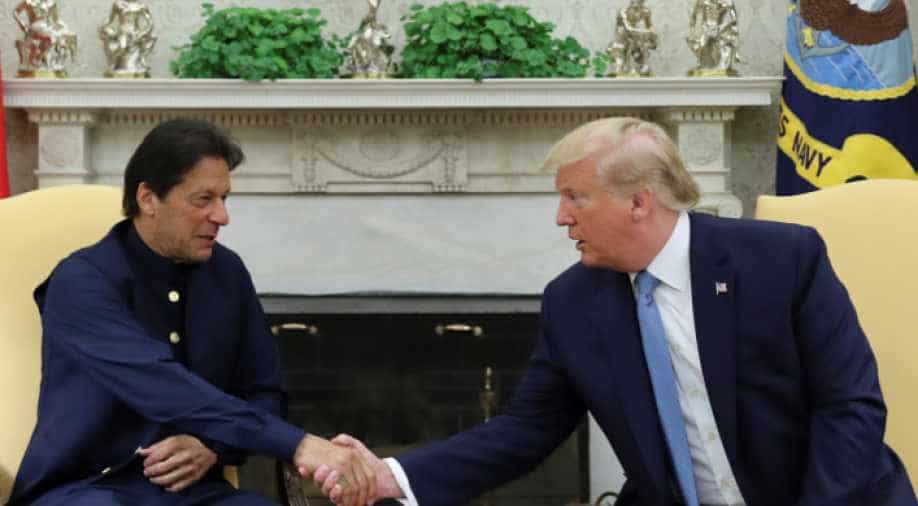 US President Donald Trump with Pakistan’s Prime Minister Imran Khan in the Oval Office at the White House in Washington. Photograph:( Reuters )

The UNSC meeting has been scheduled for today to discuss the situation in Jammu and Kashmir.

Prime Minister of Pakistan Imran Khan on Friday telephoned US President Donald Trump to apprise him of the situation in Kashmir region.

"Today (Khan) has talked to President Trump. Views were exchanged on the situation in the region and particularly the situation in Occupied Kashmir," said foreign minister Shah Mehmood Qureshi during a press conference.

The United Nations Security Council (UNSC) meeting is underway to discuss the situation in Jammu and Kashmir.

Pakistan Foreign Minister Shah Mehmood Qureshi had earlier written a letter to UNSC president Joanna Wronecka, urging the council to urgently convene a session on India's decision to reorganise Jammu and Kashmir and revoking of Article 370.

China had requested a closed meeting on Jammu and Kashmir, citing the letter sent by Qureshi.

Ever since India announced its decision to do away with Article 370, Islamabad has escalated its virulent rhetorics against New Delhi and tried to involve the international community in the matter.

Pakistan has alleged that India's decision of revoking the provisions under Article 370 will not only threaten the regional peace but also the world peace.

However, India has made it clear that it is an internal matter of the country and does not violate the Line of Control (LoC) or any border.

Trump and Khan also discussed Afghanistan, where the US is engaged in talks with the Taliban, and pledged to remain in constant contact moving forward, the minister added.

During a meeting with Khan in July, Trump said that Modi had asked him to help mediate the Kashmir dispute -- a claim Delhi strenuously denied.

India has always insisted the Kashmir issue can only be resolved bilaterally with Pakistan.