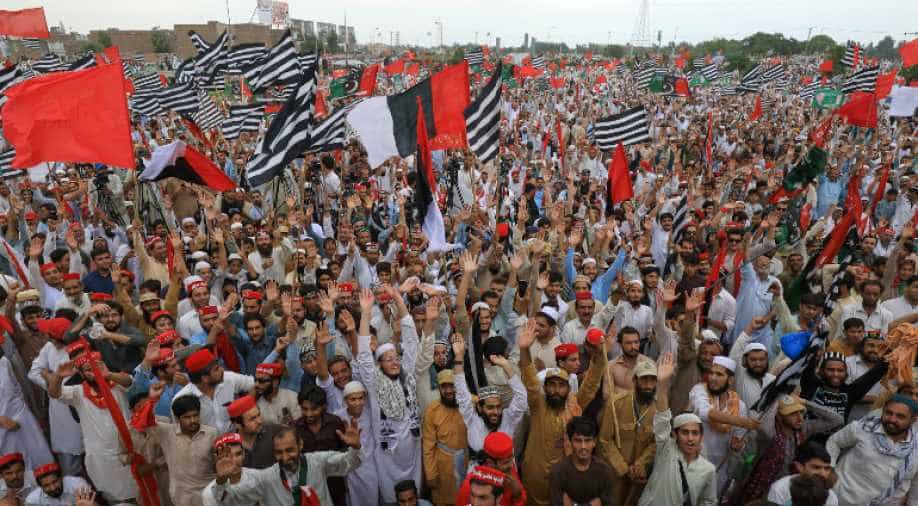 The so-called 'Black Day' protests, a year after Khan's PTI party swept to power following a bitterly contested election, come amid mounting economic problems for Pakistan and a political climate that has grown increasingly angry

Pakistan's main opposition parties held protest rallies in cities across the country on Thursday, accusing Prime Minister Imran Khan's government of ruining the economy and seeking to intimidate and silence its opponents.

The so-called "Black Day" protests, a year after Khan's PTI party swept to power following a bitterly contested election, come amid mounting economic problems for Pakistan and a political climate that has grown increasingly angry.

Surging prices of fuel and everyday staples, a plunging currency that has lost a quarter of its value since the election and allegations of media censorship and stifling opposition voices have fuelled the protests.

"Every day in the presence of Imran Khan is a black day," Maryam Nawaz, leader of the PML-N party that was ousted from power in last year's election told a crowd of thousands of supporters in a football stadium in the western city of Quetta.

She accused Khan of accepting "dictation" from US President Donald Trump during his visit to Washington and proposed a march on the capital Islamabad but did not name a date.

Khan's government came to power with Pakistan already nearing a balance of payments crisis, and this month agreed a $6 billion bailout with the International Monetary Fund that came with tough austerity conditions including more taxes and an agreement to let the rupee currency fall sharply.

It has dismissed the opposition protests and blamed the economic turmoil on massive corruption and economic mismanagement by previous governments, accusing their leaders of shifting millions of dollars out of the country illegally.

The arrests have fed the anger of opposition parties, who say the government has manipulated the justice system to crush its adversaries.

Earlier this month, PML-N officials produced video evidence they said showed the judge responsible for sentencing Nawaz Sharif had been blackmailed into convicting him. The judge, who said the PML-N had also attempted to blackmail him, has since been sacked from the court that decided the Nawaz case.