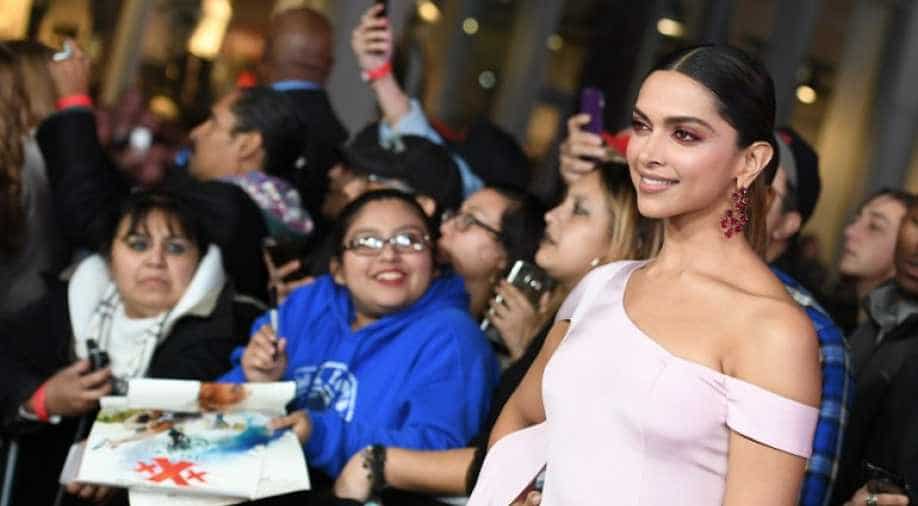 Deepika Padukone, who is playing the lead role in 'Padmavati', spoke out in a series of tweets. Photograph:( AFP )

Bollywood rallied behind director Sanjay Leela Bhansali who was attacked by members of a fringe group, the Rajput Karni Sena, while shooting his upcoming historical drama "Padmavati" in Jaipur yesterday (January 27).

The filmmaker, has meanwhile, reportedly cancelled the shooting in Jaipur.

Deepika, who plays the titular role of Padmavati -- a medieval-era Rajput queen -- said she was "shocked" and disheartened by the events and said the team behind the film was not distorting any historical facts.

As Padmavati I can assure you that there is absolutely no distortion of history.#Padmavati

Our only endeavour is & has always been to share with the world the story of this courageous & powerful woman in the purest form there is.??

In a state of shock!deeply saddened and disheartened by yesterday's events!#Padmavati

Ranveer Singh, who plays Turkish king Alauddin Khilji in the film, said the film was being made keeping in mind the "sensitivities and emotions of the people of Rajasthan." He also added that Sanjay Leela Bhansali one of the most accomplished and authentic filmmakers in India and he would not do anything to hurt anyone's feelings.

As a team, we are making 'Padmavati' keeping in mind the sensitivities and emotions of the people of Rajasthan and the Rajput community.

Sanjay Sir is one of the most accomplished & authentic filmmakers we have in India, & he wont ever do anything to hurt anyones feelings.

Whats happened is very unfortunate. We hope the people of Rajasthan will understand & empathise with our intentions & give us their support.

His co-star from the film, Shahid Kapoor, condemned the violent attack on his director, saying "will know when u see #padmavati the dignity he brings to it."

Very very sad. Words do fall short and feel too little to express feelings. Violence is unacceptable. This incident has shocked me.

We need to look deep within as a society, as a country, as a people. Where are we headed.

Sanjay bhansali is a film maker who the country should be proud of. You will know when u see #padmavati the dignity he brings to it.

"Padmavati" is based on the character of Queen Padmavati, who features in the epic poem. "Padmavat", written by renowned poet Malik Muhammad Jayasi in the 16th century

The plot of the film revolves around the 1303 siege of Rajasthan's Chittor fort by Alauddin Khilji. According to folklore, the invasion was motivated by his desire to capture Rani Padmavati, the wife of the ruler of Mewar, Rana Rawal Ratan Singh, who immolated herself after the fort was captured.

The Rajput Karni Sena is objecting to an alleged dream sequence between Padmavati and Alaudin Khilji. Its members went on a rampage during filming at Jaipur's Nahargarh Fort on Friday, and allegedly attacked Bhansali and destroyed film equipment.

They claim that the director is distorting facts and depicting Padmavati's character in a poor light. They also blamed the filmmaker's security personnel for the commotion, alleging that they had fired bullets in the air.

"He (Bhansali) is distorting history and we will not allow them to do so. In no book is it written that Alauddin Khilji fell in love with Padmavati or he was her lover,"  Lokendra Singh Kalvi, a senior leader of Karni Sena told the press in Jaipur on Saturday.

"This film should not be made. We wrote a number of times to Bhansali asking him to present history in the right manner. But he did not listen to us."

We had gone to talk to them but bullets were fired in the air which provoked the members. It was me who tried to stop the members from assaulting Bhansali," Mahipal Singh, the state chief of the group said.

Rajasthan Congress leader Pratap Singh on Saturday said that Queen Padmavati was not anyone`s `lover` as the filmmaker is portraying her in his upcoming flick, and was devoted to her husband."

Padmavati has a history, she had fought for everyone. Chittaur is a pride of the nation," Pratap Singh told ANI.

The Film & Television Producers Guild of India today (January 28) urged the government to take strong punitive action against the miscreants, saying that the film industry had become a soft target by fringe groups.

"As President of The Film & Television Producers Guild of India and speaking on behalf of the entire film industry, I strongly condemn the acts of vandalism on the sets of 'Padmavati' as a direct attack on freedom of expression in our democracy," the film guild's president Siddharth Roy Kapur said.

The Guild pointed out that this is not the first time that fringe elements have "unilaterally taken the law into their own hands to disrupt shoots/film releases and cause tremendous financial losses to film producers."

"It is a glaring paradox that on the one hand the Central Government, various State Governments along with the film fraternity has been leaving no stone unturned to universally project India as an attractive shooting locale and on the other such hands miscreants are resorting to hooliganism of the worst order to defeat the `Shoot in India` endeavor," the film body said in a statement.

The Sanjay Leela Bhansali-directed historical magnum opus "Jodhaa Akbar"  was also not permitted to release in Rajasthan by the same group despite censor certification, the guild said in a statement.

Here's how the rest of the film industry condemned the attack:

At the same time Shame on you Karni Sena, you make me feel ashamed to be a Rajput.. bloody spineless cowards ..

In 2008 , this is what SLB said about how he looks at Padmavati..for those who assume what he is making without knowing the script are wrong pic.twitter.com/ksfBGe5MW0

Am appalled at what has happened with Sanjay Bhansali....this is the time for all us as an industry to stand by our people and fraternity!!

It's appalling to hear what happened to #SanjayLeelaBhansali .im so saddened..Violence is not what our forefathers taught us..

Appalled & horrified by what happened on SLB set.NO amount of diff of opinion or disagreement justifies this pathetic behaviour. Shameful!

Did random people enter another persons workplace n raise their hand on him because dey decide dey don't like what he does? I am enraged!!!

"Violence of any kind is terrible. You can have different views about incidents in history and that's another matter that people can also feel aggrieved but to take law into your hands and attack a person like this is simply not done. It is not the right way to approach it," Benegal told ANI.