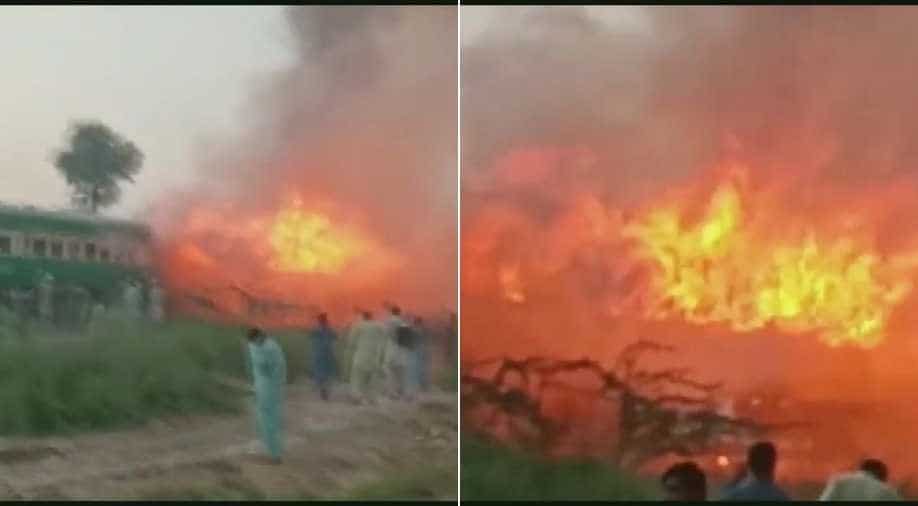 The injured people are being shifted to nearest local hospital. Photograph:( ANI )

A fire broke out on a train in Pakistan after a gas cylinder exploded which passengers were using to cook breakfast.

At least 65 people lost their lives on Thursday as a fire broke out on a train in Pakistan, news agency ANI reported.

The fire broke out after a gas cylinder exploded inside the train which the passengers were using to cook breakfast.

According to a report, 42 people were injured and have been rushed to the nearest hospital.

Three coaches of the Karachi-Rawalpindi Tezgam express caught fire in Liaqatpur near Pakistan's Rahim Yar Khan town situated in the south of the Punjab province.

He prayed for the departed souls and the bereaved families and wished speedy recovery to the injured.

Terrible Tezgam train tragedy with gas cylinder carried by passenger exploding. Prayers and condolences go to the victims families. A tragedy that could have been avoided but ever since I can recall while travelling by train no baggage check or restrictions enforced. Tragic.

Pakistan’s colonial-era railway network has fallen into disrepair in recent decades due to chronic under-investment and poor maintenance.

Eleven people were killed in an accident in July and four in another accident in September.

About 130 people were killed in 2005 when a train rammed into another at a station in Sindh province, and a third train hit the wreckage.