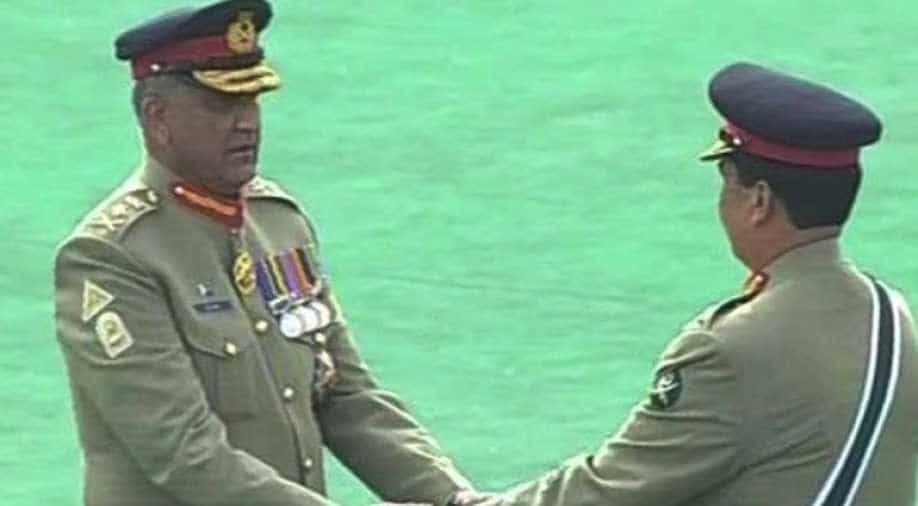 Gen Raheel handed over the command of world's sixth-largest army by troop numbers to 57-year-old Bajwa at a ceremony held in the Army Hockey Stadium, close to the General Headquarters (GHQ) in Rawalpindi. Photograph:( Twitter )

Gen Raheel handed over the command of world's sixth-largest army by troop numbers to 57-year-old Bajwa at a ceremony held in the Army Hockey Stadium, close to the General Headquarters (GHQ) in Rawalpindi.

Prime Minister Nawaz Sharif on Saturday appointed Bajwa as Chief of Army Staff (COAS) by elevating him to the rank of four-star general.

Raheel in January had declared that he would not seek extension. There was speculation that the PML-N government would give him an extension at the eleventh hour citing reasons that he was needed by the country to lead the war on terror. The post of Army chief is the most powerful in Pakistan.

In his final speech as the army chief, 60-year-old Gen Raheel cautioned India against adopting an aggressive stance in the region.

He said that in recent months "India's increasing terrorism and aggressive stance" in Kashmir have "endangered" the region.

"India should know that mistaking our policy of patience for weakness would be dangerous," he said.

"This is reality, that in South Asia, lasting peace and progress is impossible without solution of the Kashmir issue. For that, international community's special attention is necessary," he said.
He also stressed the need for institutions to work together for the nation's progress.

"It is important that all institutions work together against external threats and internal threats. For this, we will need to follow the National Action Plan in letter and spirit," Gen Raheel said.
"The army will remain alert to threats, whether external or internal," he said.

For regional peace, he said, issues should be resolved politically.

The China-Pakistan Economic Corridor is a major factor in ensuring regional peace, he said.

"The departure of the first cargo from Gwadar port has shown this journey cannot be halted now," he warned. "The time is here now that the enemies of CPEC stop working against it and become a part of it."

Bajwa was earlier serving as Inspector General of the Training and Evaluation and also commanded the famed 10 Corps, the army`s largest, which is responsible for the area along the Line of Control (LoC).

As a major general, Bajwa led the Force Command Northern Areas. He also served in the 10 Corps as lieutenant colonel. He also served with a UN mission in Congo as a brigade commander alongside former Indian army chief Gen Bikram Singh, who was also there as a division commander.

The new army chief has wide experience of LoC affairs due to his extensive involvement with Pakistan-occupied Kashmir (PoK) and northern areas.

According to reports, General Bajwa's "pro-democracy credentials" and his low-profile influenced the Prime Minister to appoint him to the powerful post of army chief superseding four top generals.

The military has been in charge of the country for more than half of Pakistan's nearly 70-year history since independence from Britain.

"We need to take note of the fact that this is the (Pakistan) new Army chief sending a message. His policy will be same as followed by the predecessor...We (also) need to send across a message to him," he said.

"India will hit back harder every time it is targeted," he said.

The BJP MP's remarks came after militants in police uniform attacked an Army artillery unit in Nagrota, killing three Army personnel, including an officer, and leaving several others injured.

Singh said Pakistan continued to "bleed" India through such terrorist attacks, adding that the recently conducted PoK surgical strike by the Indian Army was not a "one-off" event.

The BJP leader added that India needed to "follow up on its policy of imposing cost" and that the "Army should revisit the security procedure in general, particularly in Jammu and Kashmir."