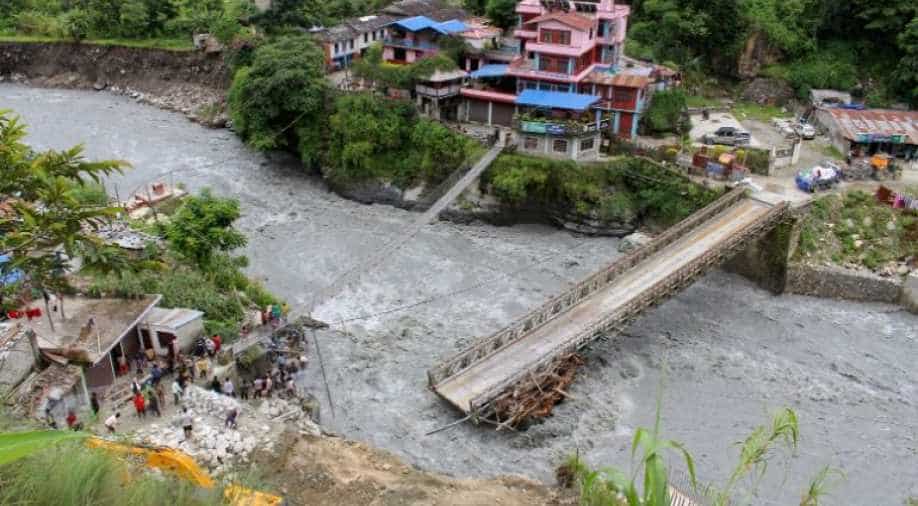 People gather near the bridge that is damaged due to the flood at Raghu Ganga River in Myagdi, Nepal  Photograph:( Reuters )

The floods in Indrawati and Melamchi rivers are the result of an increase in water level after Tuesday's incessant rain.

At least one person died while dozens are missing as floods triggered by monsoon rain wreak havoc in the Sindhupalchowk district of central Nepal, officials confirmed.

The floods in Indrawati and Melamchi rivers are the result of an increase in water level after Tuesday's incessant rain.

"We suspect the flood originated from the main source of Melamchi and Indrawati River. The flood swept through corridors starting from Helambu. We are working on confirming and access the damage caused by the flood since last evening, as of now we only have confirmed reports of one dead and reports of dozens still missing or out of contact," Arun Pokhrel, Chief District Officer of Sindhupalchowk told ANI over the phone.

"Along with, the flood is also reported to have swept bridges and other infrastructures of electricity and communications. We still are not able to access the damage caused by it," Sherpa added.

Sindhupalchowk is one of the epicenters of the 2015 earthquake and has been battered by flood and other calamities on yearly basis.