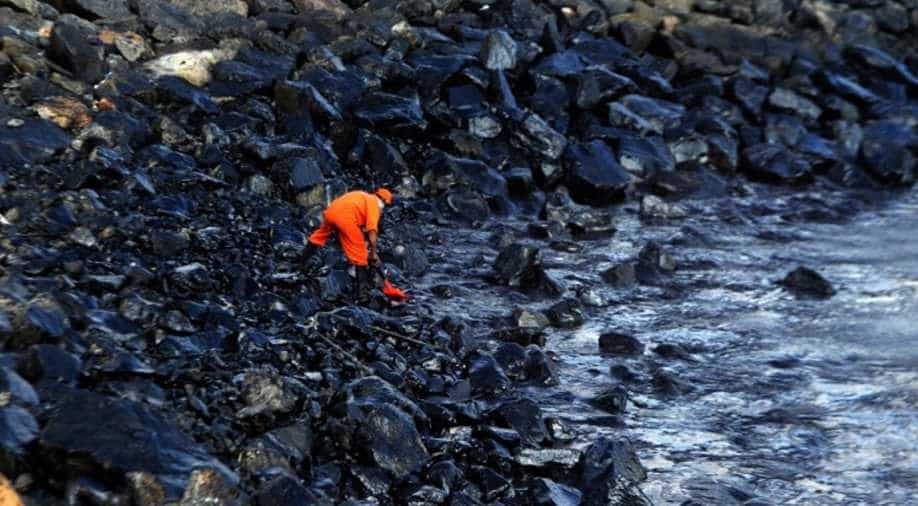 The oil spill in the Chennai coast has badly affected marine life in the area . Photograph:( AFP )

Tamil Nadu police have registered cases against the management of two tankers that collided last week leading to a massive oil spill along the Chennai coast, media reports said.

Even a week after the oil spill off India's south Indian state Tamil Nadu's capital, Chennai, there is very little confirmed information on the substance that was tipped over into the sea after two ships collided last Saturday.

Conservation activist have been urging the government to treat the oil spill that has now reached Chennai's famous Marina beach seriously, say it was a small problem that has been compounded by government neglect.

"We don't know how much of it has spilled and what spilled. In the absence of that, we don’t have a baseline estimate to assess the damage," said social activist Nityananda Jayaram, who writes on environmental abuse. "Latest information from the Coast Guards say they have cleaned 70 tonnes of spillage from the northern reaches of Chennai alone."

Jayaram said government apathy and denial of the spill has turned it into a bigger environmental hazard for marine life as well as communities like those of fishermen dependent on the sea for a livelihood.

"Even on the day, January 31, that the slick had reached the Marina (beach in Chennai), the minister (Indian minister for surface transport and ports), Pon Radhakrishnan, came to the city and said there was no spill. Before that the Kamarajar port had said there was no spill. Now the Coast Guards have joined the melee and said the environmental impact is minimal," said Jayaraman.

State authorities had pressed into service 2,000 men for cleaning the beaches and sea front with about 50 "super-suckers" cleaning the effluents from the waters.

"Who are these people, youngsters with no training or even protective gear. The surfeit of oil makes it difficult to breathe there. Petroleum is carcinogenic. This is the most vulgar display of ignorance in Digital India".