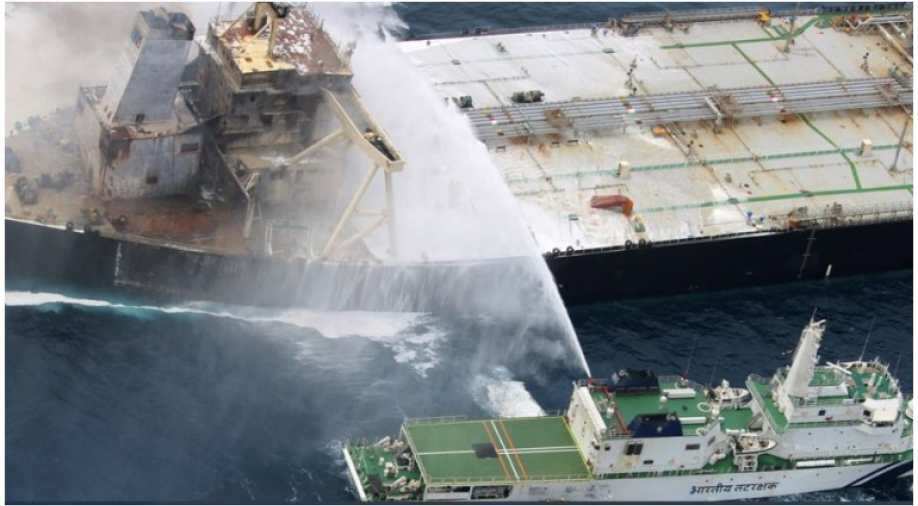 The Coast guard has also officially confirmed that the minor oil sheen sighted near aft (rear) of MT New Diamond on Tuesday, was part of the unburnt oil/ Oil mixed with water, in the ship’s engine room. This region of the ship had been spared from the explosion onboard on Monday.

The Indian Coast guard (ICG) has allayed fears of a possible oil leak at the site of the MT New Diamond, 40 miles off the Sri Lankan Coast. The latest statement from the ICG says that a team of naval architects that boarded the oil tanker on Wednesday, has found the vessel’s stability to be in the safe zone and there is no breach of its tanks. In an improvement from the situation that persisted on Tuesday, there are currently no hotspots, flames/smoke on-board.

However, the rear portion of the vessel (aft) has sunken into the water by 1 metre, a slight increase from its earlier position of 3 feet. Efforts are underway to get the ship on even keel with the assistance of the salvors.

The Coast guard has also officially confirmed that the minor oil sheen sighted near aft (rear) of MT New Diamond on Tuesday, was part of the unburnt oil/ Oil mixed with water, in the ship’s engine room. This region of the ship had been spared from the explosion onboard on Monday.

WION had earlier reported that the oil slick was from the explosion and not from the cargo hold.

In Pollution Response configuration, ICG Dornier aircraft sprayed Oil Spill Dispersant (OSD) to disintegrate the sheen on Tuesday and Wednesday. The ships were used to churn the waters to accelerate the disintegration of the oil sheen.

“The three lakh metric tonnes cargo of Kuwait crude being carried by the vessel is intact, not a drop of it has leaked. Our ships are equipped and prepared to even contain and perform recovery operations even in the event of an unfortunate spill” Krishnaswamy Natarajan, Director General, Indian Coast Guard said. He expressed hope that the Coast guard would be able to recover the entire cargo and create maritime history, as they had done earlier in 2016, at the Gulf of Kutch.

Speaking of the challenges involved in the current operation he said that the ships and tugs are required to maintain a 10-15 meter distance from the burning vessel to remain safe, adding that the vessels had to simultaneously douse the fire and cool different parts of the ship.

“There is a breach on the port side of the superstructure and the hull and the crack on the deck above the waterline. However, these breaches are not causing any entry of seawater” DG, Coast Guard added.

Currently, 7 ICG vessels are on site to aid in the phase 2 operations in the recovery of MT new Diamond, as phase 1(fire-fighting) is said to have ended. ICG has been at the forefront of this operation since Thursday, September 3rd.