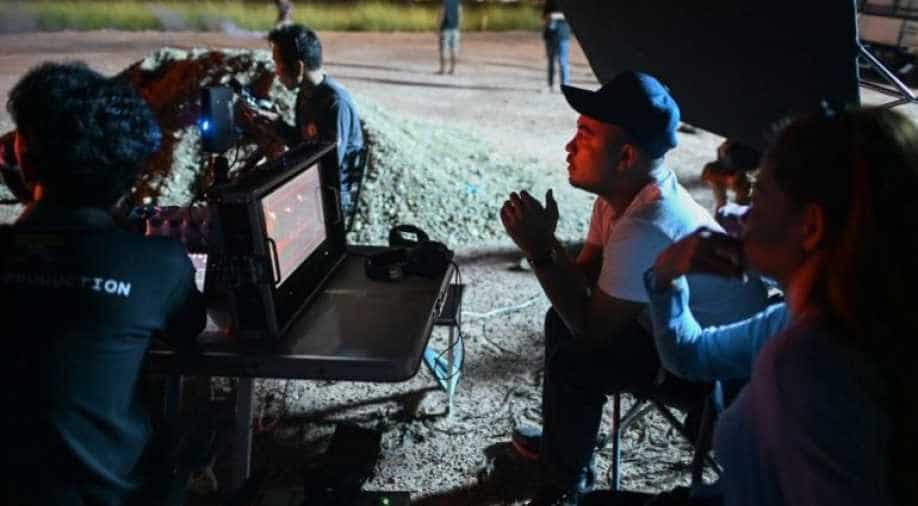 The Southeast Asian nation used to be a regional cinematic hub before the 1962-installed military junta suppressed creativity, imposed censorship and cut the country off from outside influences.

A deadly race to find the hidden treasure, car chases and slick fight scenes drive the breakneck narrative of one of Myanmar's latest blockbusters, as a new generation of directors aims to revive the country's golden era of film.

The Southeast Asian nation used to be a regional cinematic hub before the 1962-installed military junta suppressed creativity, imposed censorship and cut the country off from outside influences.

Myanmar's opening up since 2011 has so far done little to propel its movie industry -- which is preparing to mark its century next year -- onto the international stage.

"The film industry is like the country -- after 100 years, it's not in good shape," says Grace Swe Zin Htaik, 66, who has worked in the business for decades as an actress and consultant.

Foreign distributors remain unmoved by its movies, often churned out to hackneyed formulae with low production costs and over-acting that many find toe-curling.

A handful of young directors, however, are seeking to raise the bar -- using skills and know-how picked up overseas.

Director Arkar Win, 29, learned the trade in Singapore before coming back to Myanmar.

His box office 2018 smash hit "The Mystery of Burma" set the protagonist on an action-packed quest to find an ancient ruby buried in a hidden temple, a plot with clear nods to Steven Spielberg's Indiana Jones and Jon Turteltaub's National Treasure.

"We're trying to catch up," he tells AFP in Yangon.

"Indonesian and Cambodian films are selling internationally... but the quality isn't here yet."

Arkar is proud that his movie's stunts, set against cinematography that sweeps across Myanmar's dramatic landscapes, have enticed "new audiences" to the cinemas.

But a duopoly of distributors controlling all of Myanmar's 154 commercial movie theatres means there is little negotiating power for directors or space for new talent.

A frenetic filming schedule is the norm in the industry, meaning proper castings and pre-production planning often fall by the wayside, while scripts are commonly written on the set of low-budget films.  Around half of the movies made in 2018 ended up going straight to DVD.

"Until last year I had no hope," said director Christina Kyi, who recently broke into Myanmar’s movie-making scene after returning from a New York film school 10 years ago.

"Most actors here can do up to 20 films a year. With me they know they will have to work for six months," she says.

For directors like Arkar and Kyi -- who both missed out at this year's Myanmar Academy Awards, stoking mass controversy -- gaining acceptance from the mainstream movie industry presents a serious challenge.

Tipped for top prizes in the country's version of the Oscars, she came away with nothing.

Outraged fans organised a boycott on social media of the winning director's movie, pouring scorn on what they viewed as the elitist awards.

With an arthouse flick at this year's Cannes Festival, Midi Z is perhaps Myanmar's highest-profile director internationally -- but he has lived for years in Taiwan.

Plans are afoot for a movie studio in capital Naypyidaw.

But the industry might not see as smooth a transition away from political interference as many would like.

Civilian leader Aung San Suu Kyi opened the contentious Academy Awards with a speech urging the film industry to use "soft power" towards a "peaceful, united and developed country".

The military is only too aware of the power of the silver screen in a country riven with ethnic armed conflicts.

A high-budget film is released each year to mark Armed Forces Day, championing the sacrifices made by patriotic soldiers fighting battles against villainous rebels.

Work has been underway for years to produce a biopic of Suu Kyi's father and independence hero General Aung San.

The movie even has its own committee under the Ministry for Religious Affairs and Culture.

Foreign filmmakers are eyeing up Myanmar as a shooting location.

An array of exploding cars and daring stunts recently beguiled Yangon residents for the filming of Hong Kong movie "Line Walker 2" and there are rumours Nicolas Cage will soon visit to shoot his upcoming sci-fi flick "Jiu-Jitsu".

These movies are guaranteed to do well in action-mad Myanmar.

Arkar says it is down to Myanmar filmmakers to produce the goods in a country with limited nightlife and entertainment.

"The audience is there. We just need to do good work."