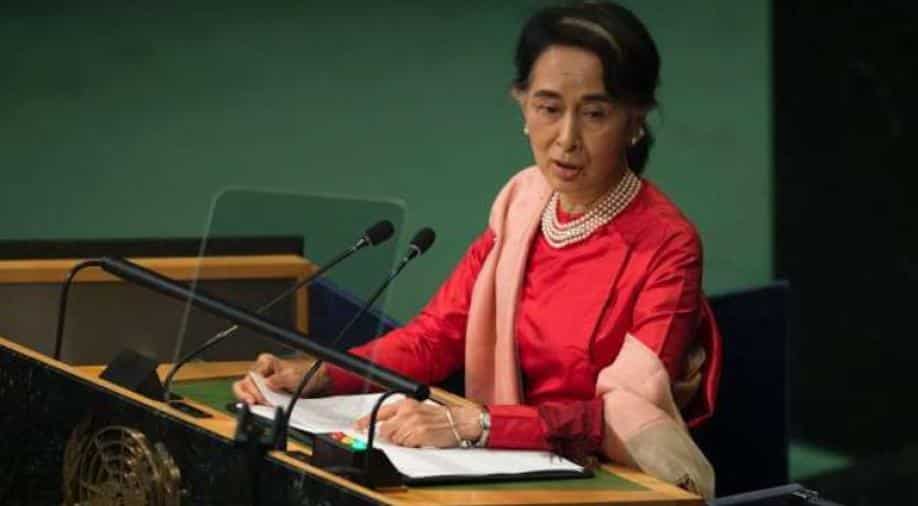 'The president's office has instructed the military to launch an operation to crush the terrorists,' Zaw Htay told a news conference.

Myanmar government leader Aung San Suu Kyi discussed insurgent attacks on Myanmar police on Monday in a rare meeting with the military chief, and her administration called for the armed forces to "crush" the rebels, a government spokesman said.

Fighting between government forces and the rebel Arakan Army in the western state of Rakhine has displaced thousands of people since early December, according to the United Nations.

The Arakan Army wants greater autonomy for Rakhine, where the mainly Buddhist Rakhine ethnic group makes up the majority of the population.

Rakhine State saw a military-led crackdown in 2017, following attacks by Rohingya Muslim insurgents that prompted hundreds of thousands of Rohingya to flee westwards into neighbouring Bangladesh.

"The president's office has instructed the military to launch an operation to crush the terrorists," Zaw Htay told a news conference in the capital, Naypyitaw.

While Suu Kyi is barred from being president by a military-drafted constitution, Win Myint is a loyalist. Suu Kyi is seen as a de facto leader of the civilian government, while the military remains in charge of security.

The UN Office for the Coordination of Humanitarian Affairs said on Monday that 4,500 people were sheltering in monasteries and communal spaces after being displaced by the fighting in the past month.

Zaw Htay described the Arakan Army as a "terrorist organization" and said it had surprised security forces on guard against Rohingya insurgents.

He said the Arakan Army could destabilise Rakhine State for years to come and warned people not to give it support.

"Do they want to see a cycle of violence lasting decades?" he said. "I want to tell Rakhine people who are supporting (the Arakan Army): Don't think about yourself, but think about your next generation."

Myanmar governments have battled various ethnic minority insurgent groups since shortly after independence from Britain in 1948, though some have struck ceasefire agreements.

Zaw Htay also accused the Arakan Army of meeting the Arakan Rohingya Salvation Army, a group of Rohingya insurgents that Myanmar also considers terrorists but added that Myanmar was unable to eliminate the groups as they had bases across the border in Bangladesh.

One BGB officer asked Myanmar to provide evidence of militant camps in Bangladesh.

“All the terrorism is taking place on the other side of the border," said Lieutenant Colonel Manzural Hasan Khan, a BGB commander in Cox's Bazar, the district where more than 900,000 Rohingya Muslims are sheltering having fled bouts of violence that have drawn international condemnation against Myanmar.

"The world knows what happened on the other side," he said.

The Myanmar government and military leaders also discussed a temporary ceasefire the military announced last month in other parts of the country, where other insurgent groups operate, Zaw Htay said.

The meeting was held at the request of the president's office, he said.