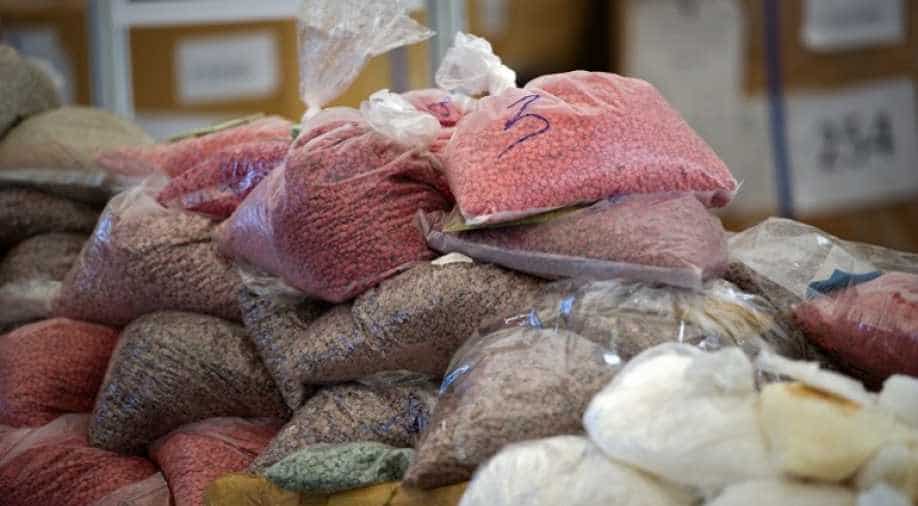 Myanmar has seized 30 million meth pills along with more than two tonnes of "ice" and heroin in a record bust, the government said Thursday, as drugs pour from labs in lawless border regions.

The operation in a remote part of northern Myanmar came after the Tuesday arrests of four suspected traffickers who led police to a house in Shan State's Kutkai township where the haul was discovered, the Ministry of Home Affairs said in a statement.

"It's the biggest drug seizure with the largest amount (by value and quantity) in (our) history," a senior police officer from the anti-drug department said on the condition of anonymity as the investigation was ongoing.

In addition to the meth tablets, the authorities found 502 kilograms (1,104 pounds) of heroin and 1,750 kilograms of crystal methamphetamine, or ice, bringing the total estimated value to $54 million, or one-fifth of the amount of narcotics seized in the country in all of 2017.

A picture of the packages of drugs stacked high on a table was published by the ministry.

Myanmar is the second largest opium producer in the world after Afghanistan, but levels of poppy cultivation have declined as demand for methamphetamine surges, leading to numerous multi-million dollar busts.

Its lawless border areas are the hub for Asia's meth producers, who pump out "ya ba" meth pills and ice, the more addictive crystallised version, across Southeast Asia.

Drug trafficking has been increasing around the country, especially in war-torn northern Shan State as many ethnic armed groups use it to buy weapons.

Trafficking routes have also reached into more well-known conflict areas in the west of the country where an army crackdown on Muslim Rohingya insurgents has caused more than 655,000 people from the stateless minority to flee to Bangladesh since August.

Myanmar police seized more than $5 million worth of methamphetamine pills in the northern part of Rakhine state in October, two months after the army poured into the area for a new counteroffensive against Rohingya militants that has been described as ethnic cleansing.