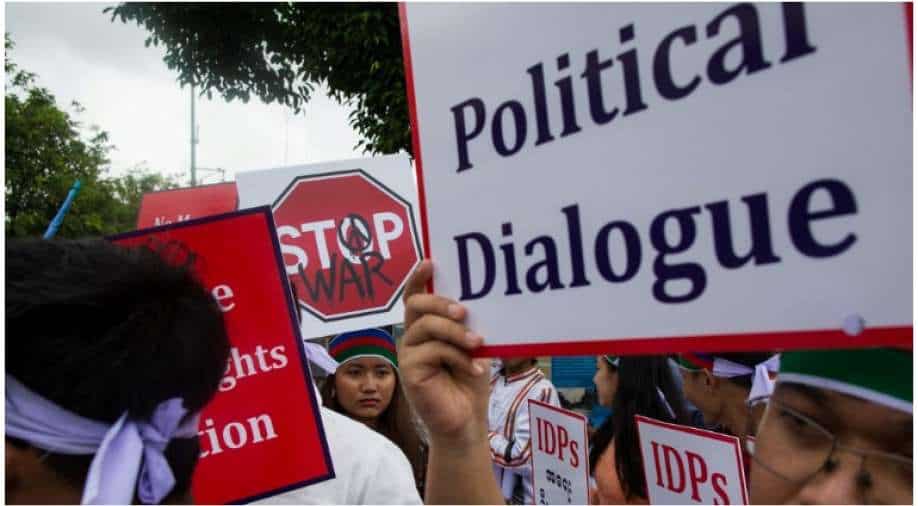 Ethnic Chin people hold placards during a protest asking for an end to conflict in Chin state and Rakhin State in Yangon on July 13, 2019. Around 1,000 Chin people have been displaced as fighting continues between the Myanmar military and the Arakan Army (AA) in the area between Chin State and Rakhine State. Photograph:( AFP )

The ruling National League for Democracy (NLD) said the three – two women and a man – were abducted on Wednesday while campaigning in Rakhine before a Nov. 8 election

The ruling National League for Democracy (NLD) said the three – two women and a man – were abducted on Wednesday while campaigning in Rakhine before a Nov. 8 election.

The western region, where most parliamentary seats are held by Rakhine nationalist opponents of Myanmar’s leader Aung San Suu Kyi, has been beset by an insurgency that has intensified this year.

Arakan Army said in a statement posted online the three candidates would be "detained and investigated as required by circumstances till a certain time".

It accused the NLD of complicity with military "atrocities" against civilians but said it was willing to free the group in return for the release of students arrested while protesting the war and other "innocent people" detained by authorities.

"If they make demands in this way, it would difficult for us to comply," Myo Nyunt, a member of the NLD’s central executive committee, told Reuters by phone.

The country's election committee said on Saturday more than half the polling stations initially planned in Rakhine will no longer operate, as parts of the state are too unstable for voting.

The AA, which recruits from the mostly Buddhist ethnic majority in Rakhine, seeks greater autonomy for the region from the central government.

Tens of thousands of people have been displaced since fighting began in early 2019 and dozens killed.

The Arakan Student Union said four of its members had been detained on Monday after marching through the state capital of Sittwe holding banners criticising the government and military.

Several other students have been arrested after similar protests in recent weeks.